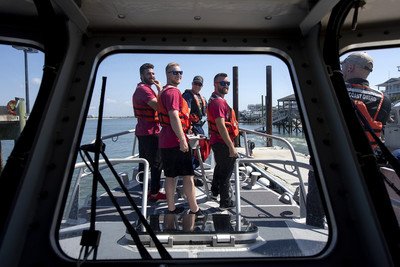 Coast Guard response boats don’t handle quite the same as race cars, but to NASCAR driver Austin Dillon, they’re both a blast.

Dillon had a chance to see how the Coasties protect America’s maritime borders before he races in their honor at the Coca-Cola 600 over Memorial Day weekend. The pro driver and two members of his pit crew hopped aboard a 45-foot response boat and got to take the wheel — err, joystick — for a bit.

”It’s more like playing Xbox. It’s pretty cool that they use sticks instead of a wheel,” Dillon said. ”It’s very responsive and stops on a dime, too, which is cool to see. Those guys are fighting some tough seas out there, and the smoothness of the boat and the way it reacted to the water — I’ve never ridden on anything like that.”

Afterward, Guard members demonstrated rescue rope training and let Dillon ”throw a line” as they would if they were trying to rescue someone in distress. He learned it’s all about the loop.

”The nicer you make your loops, the better this thing’s going to fly,” explained Coast Guard Petty Officer 2nd Class Dana Wise as he demonstrated for Dillon and his team.

Next, they took part in a simulated search and rescue mission and learned some boat-handling skills before coming back to shore. That’s where Dillon signed and traded NASCAR and Coast Guard flags with crew members, who he said he actually envies.

”I love the fact that they get to go out there and whip around on those boats and save people’s lives,” Dillon said. ”It’s a very cool experience to be able to see all the hard work and effort they put in.”

No. 3 said it’s a special honor to drive in the Coca-Cola 600 with the name of a fallen service member, who has yet to be announced, inscribed on his car.

”I feel like our fallen [service members] ride along with us. Their families definitely become a part of our racing family,” he said.

Ahead of last year’s Coca-Cola 600, Dillon, who won the race in 2017, shadowed soldiers at Fort Bragg, North Carolina. His visit to Wrightsville Beach was the last of five interactive military base stops for NASCAR drivers ahead of the Coca-Cola 600. The visits were so the drivers could get a firsthand look into life in the military ahead of the race’s patriotic prerace Salute to the Troops.