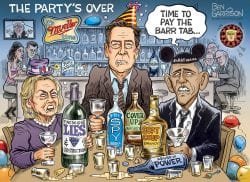 We all know the main-stream media (MSM) hasn’t been a popular place on our TV’s and news resources in a very long time. Their rotting ratings prove this fact. So, what’s changing lately with the political pimps?

Are they awakening to the reality their Political Whore ratings are rotting, too? Let’s accept the reality, political pimps are not the sharpest knives in the drawer. It is doubtful any of them have an IQ above 10 as they embarrass themselves, daily.

If we run a montage of daily ‘news – actually spin’ from them, they are obviously force-fed a daily ‘one-line talking point.’ As we travel from airport to airport, hotel to hotel, restaurant to restaurant, the news may be coming from different places, but the one-liner talking points are identical.

Imagine two fixations they have and how wrong they are. They first assume every human being on the planet is totally engaged in politics – nothing else. Next, they assume we are all stupid and must be inculcated with their thoughts.

For a moment, let’s pretend we work for Ford. The boss tells us we must never engage in conversations about Christianity, the Bible, parenting, children, abortion, crime, success, business, America’s economy, American bravery, America’s generosity, travel, and especially pro-American topics but instead go immediately into a sales presentation about Ford. How many people would want to be around us?

Next, let’s take it another step and double down on stupidity. When we see people turning us off, let’s then start talking louder about the technical details like engines, transmissions, colors, equipment, options, and the like. In waiting rooms, restaurants, or other gathering places, let’s demand everyone’s attention.

Finally, when audiences give us the “I’m tuning out look,” we yell louder telling them they can now use their Fords to travel to the moon. We tell them the new Fords can navigate easily on lakes and rivers, and over 500 miles per gallon on water fuel. Obviously, the more we lie, the audience shrinks smaller and smaller.

However, after racing to the bottom of ratings, one would naturally think it would be time to apologize for their seriously sick actions, beg for forgiveness, and then move on with fact and truth, right? Nope, that won’t work for our elite political whores and pimps.

No matter the number of times they are proven to be liars, it’s time to double down and remain stuck on stupid. They just can’t help themselves.

When President Trump and supporters were being framed and falsely persecuted by the DOJ, the media pimps were giddy, pleased, happy, and loved reporting. They often referred to having climatic feelings about the potentials of prison time and pending executions.

Today, these self-loathing narcissists are whistling a much different tune. Now that a legitimate investigation is underway to root out political corruptions, criminal activities, leaking of classified information, obstruction of justice, and attempted Presidential coup, they are against it. We must pause to ask, “Wouldn’t it be insanity to be against justice?”

Leave it to the political pimps, there is no excitement promoting justice. Their voices quiver and are no longer convincing and steady. Their new playbook is to focus upon protecting the criminals and resist justice!

The news pimps must decide to either continue pimping for political whores on their way to prison or become ‘real’ journalists – truth and fact reporting. Doubtful they will choose the best pathway, right?

Support Conservative Daily News with a small donation via Paypal or credit card that will go towards supporting the news and commentary you've come to appreciate.
Tags
Conservative News media bias Politics Politics