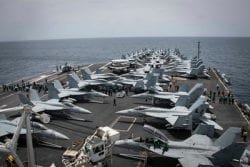 Democrat politics infect almost ever part of our lives, today. Memorial Day events are no exception. Conservatives have always believed there is a time and place for all things, but politics should never be a constant.

Democrats made a conscious decision to do whatever possible to hobble and demoralize our Military, Police, Courts, and Federal Law Enforcement. Why?

There is only one appropriate response and it’s because Nancy Pelosi, Chuck Schumer, and other Democrat Party leaders hate America so much it has driven them insane.

Pelosi has gone from leading the movement to destroy Christianity to being another “Mother Teresa.”

Then Pelosi, Schumer, and all take their oath of office to protect and defend the US but open the border gates to flood America with illegals to nullify conservative voters.

Knowingly, they are also wanting America to be overwhelmed with all sorts of diseases, murderers, rapists, thieves, drug traffickers, gang members, child sex traffickers, terrorists, and the like.

Why would any sane person – especially those sworn to protect and defend, want a nation full of criminals and terrorists? Wouldn’t Patriots do whatever is needed to stop this?

At the height of these anti-American atrocities, Democrats are blocking funds to defend America including US Military spending in favor of supporting illegals. Schizophrenia on parade?

If they succeed in eliminating ICE, millions of illegals from around the world will flood our country leaving us defenseless and unable to address yet another crisis. Yes, socialism is alive and well deep within the Democrat Party.

Unfortunately, their plan is going very well. Yes, this is confusing for any normal American. However, for the Democrats, it means each illegal offsets current Americans who don’t buy the Democrat’s lies and deceit.

The only mindset of the Democrat Party is now tyranny. Please don’t falsely believe their attempt to overthrow President Trump was an accident.

Democrats go ‘bonkers’ when God, the Bible, or the US Constitution gets in their way to gain power and money. In their insanity, laws are to be circumvented – not obeyed.

To add salt to the wound a Democrat President takes a world tour to apologize for the American blood shed in those countries to keep them free. Is that an expression of appreciation or hatred of American Patriotism?

Regardless of the Democrat’s hatred for America and the insanity on display, let’s still celebrate patriotism, please. The challenge after this year’s activities, is: “How do we slay this now exposed unpatriotic dragon in America?”

Shouldn’t we begin by holding educators accountable? Shouldn’t educators expose the dangers of Socialism? History is replete with stories about socialism and tyranny. It’s not a pretty picture!

For the Democrat Party, it’s too late. They have already been bitten and infected. The Republican Party is beginning to show signs of also being infected. These people and their propaganda must be defeated – not persuaded.

Finally, let’s please pray for and support one of the greatest Presidential Patriots ever, Donald Trump. Let’s pray that God will protect him, his families, as well as those who serve and support him.

Meanwhile, it’s Memorial Day and we should all salute and honor all Patriots who serve. May God bless their families and America!