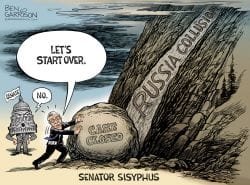 Who would have ever believed the Mueller probe (we now know it was never an investigation since there was nothing to investigate) would have boomeranged so terribly against the Democrats? It’s an amazing thing to watch as Democrats yell, threaten, and squeal as loud as possible in an attempt to push the spotlights off their criminal activities.

Why are Democrats, of all people, threatening law-abiding citizens with handcuffs and imprisonment before any trial begins, must less a verdict be announced? A few are saying this is not common responses from Democrats because they are the protectors of freedom and justice. However, for those of us who have been on earth a bit longer, we know it started years ago and they try to keep fooling the masses.

Remember the Democrat’s political efforts to keep Blacks from attending public schools? There was an all-out “Katie bar the door and take no prisoners” effort by Democrats that no American should ever forget. Then it was repeated in their attempts to keep Blacks from gaining civil rights, the Civil War, and the list goes on and on.

You see, Democrats have a very short fuse. They have no time for tolerating non-party people, debate, or listening to opposition opinions. Facts and truth have never been a problem because that never enter into their schemes.

Once they establish a political scheme, that’s the final word. It’s like watching children on the playground making up ways to play games. They know it’s not realistic or follows any legal guidelines, but it’s just the way they want to play, today. Yes, tomorrow everything changes.

Unfortunately, it is now obvious the Democrat leadership never grew out of their playground days. It’s a serious mental condition because the olden days on the playground never harmed anyone. The games they are playing today, harm everyone!

Democrats are incapable of distinguishing playing games on a school yard from patriotic leadership needed to move America forward. The most recent Congressional hearing, chaired by Jerry Nadler, proves this point. Democrats entered the hallow chamber not to revere and respect protocol but to play a silly playground game.

Meanwhile, there is no apologies forthcoming from the DNC, Nancy Pelosi, Chuck Schumer, or any other Democrat. They are as always happy to toss all of this wasteful spending of Taxpayer money right into our faces. Again, the Democrats tell us to just take it, shut up, and move on. They are in control and that’s what Democrat control means.

Now that we are learning the entire Russia, Russia, Russia ordeal was a Democrat playground scheme ushered on to the adult arena, it is now taking on a new life as a cousin to their KKK game. The difference is Democrats are masking themselves with a cloak of morality – instead of sheets. Their mental derangement forces them to expose President Trump, his families, and supporters for legally winning an election.

Democrats and their accomplices are yelling they don’t have time to burn crosses in our yards, instead these supporters of freedom, liberty, and justice must be immediately  handcuffed, tossed into prison, and sentenced to death – without any trial. Trials would only be a nuisance to allow facts and truth to get in their way.

Of course, one might also assume it further means such law-abiding citizens should be tortured to maximum lengths by Socialist torture teams.