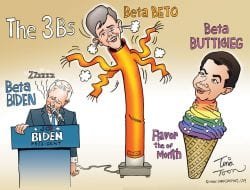 After years of President Obama, Harry Reid, Chuck Schumer, Nancy Pelosi, and other Democrat Party leaders offering no reasons to vote for a Democrat, the underlings like Biden, Sanders, Booker, Buttigieg, Harris, O’Rourke, and the like are now little by little revealing their 2020 platform in their national convention. With all of the Presidential candidates (20+) running, being noticed is a major challenge. Strange things are happening and secret Party details are being exposed. Entrepreneurs are setting up shops around Democrat meeting places to sell their “tinfoil hats!”

Candidates are forced into one-upmanship to be noticed and get a TV camera. While on camera, they are spewing wild ideas like free college, but then vote against it in the real world. Of course, “Kool-Ade” drinking Democrats won’t hear about the ‘real world’. As always, shame is not an issue for Democrats as they trample on truth and fact as a matter of routine leaving them without any conscious.

These are but a few of the recently exposed primary planks to be considered in their 2020 convention platform:

Wow! What an amazing platform to run on, right? Can any sober-minded person select even one of these planks to support? The fun part will be to watch them vote on these planks during the convention. Like always, they will call them something that sounds great, warm, and cuddly, but contrary to reality. So, it will become exciting to watch them camouflage the real identities in their charades employed to gain support.

Meanwhile, we will be able to watch Democrat supporters run off the cliff trying to follow and support their leaders. The Democrat Party is moving beyond the safe zone into areas never charted by any political party in our history.

No, there are no adults in the Democrat rooms and they have no shame as to the limits they will go to fool the public to gain power and money. They have proven themselves to be unworthy of any attention or offer any reason for anyone to take them serious about anything. Their only hope remaining is to remove all of their leaders and start fresh with people of integrity, but what are the chances of that happening?