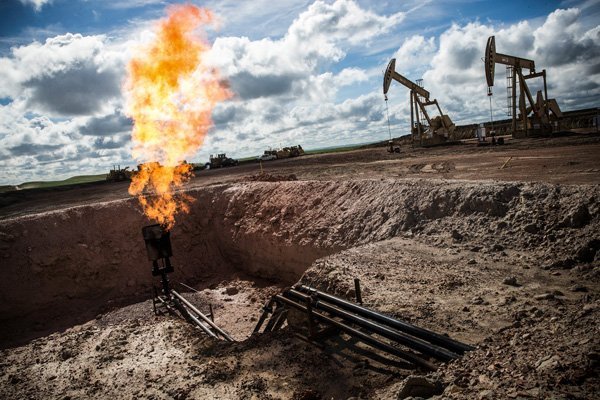 The Permian basin, now the world’s most productive oil and gas field, is booming — so much so that there’s not enough pipeline capacity to carry out all the natural gas it produces, meaning much of it is flared.

How much? Some 553 million cubic feet per day, or enough to power every home in Texas, according to data from Rystad Energy compiled by Bloomberg.

The mismatch between pipeline capacity and production is nothing new, but flaring in the Permian basin, which straddles parts of Texas and New Mexico, jumped 85 percent in the last year.

If that trend continues, more natural gas will be flared off rather than brought to market. That’s a problem President Donald Trump is looking to tackle.

Trump signed a pair of executive orders Wednesday aimed at expediting oil and gas pipelines, including asking the Environmental Protection Agency to clarify how states and environmentalists can challenge Clean Water Act permits.

“Too often, badly needed energy infrastructure is being held back by special-interest groups, entrenched bureaucracies and radical activists,” Trump said at an International Union of Operating Engineers training center near Houston, before singing executives orders Wednesday.

“This obstruction does not just hurt families and workers like you. It undermines our independence and national security,” Trump said.

While more pipelines are expected to come online in 2020 to take gas out of the Permian basin, it may not be fast enough to keep up with the massive production increases.

“The state, the pipeline companies and the producers — we all need to come together to figure out a way to stop the flaring,” Sheffield said.

Liz Cheney Slams Ocasio-Cortez: You Owe Dan Crenshaw An Apology And A Thank You