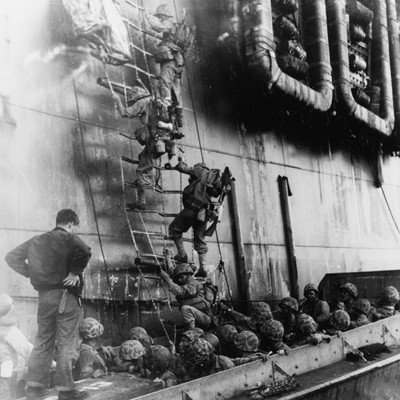 Artillery battalions were rarely on the front lines of the battle during World War II, but cannon units often found themselves in line with the infantrymen directly facing the enemy. Marine Corps Pfc. Harold Gonsalves lost his life on the front line of the Battle of Okinawa in the Pacific, but in doing so, he earned the Medal of Honor.

Gonsalves was born in January 1926 in Alameda, California. He was an active high school student who played sports and sang in the glee club, but he dropped out after two-and-a-half years to start working.

By the time he was 17, the war was well underway. He enlisted in the Marine Corps in May 1943 and quickly became an active-duty cannoneer. By March 1944, Gonsalves was with the 22nd Marines, taking part in successful Pacific theater campaigns, such as the Marshall Islands and the liberation of Guam.

Toward the end of 1943, Gonsalves was reassigned to the 4th Battalion, 15th Marines, 6th Marine Division. It was with this unit that he landed on Okinawa on April 1, 1945.

The Battle of Okinawa was the last major amphibious assault of World War II, with the mission being for the Allies to take control of the island. Doing so would clear a path for the final invasion of Japan.

On April 15, 1945, Gonsalves’ battalion was shooting artillery toward a Japanese stronghold at the top of a tall mountain on the Motobu Peninsula. Gonsalves, who was part of a forward observation team directing that fire, repeatedly braved his way through bullets and mortars to determine where to aim.

Eventually, his battalion’s commanding officer decided to move them to the front lines to do more damage. Gonsalves didn’t hesitate to head up the hill with the officer and push to the front. He and another Marine were tasked with laying telephone lines down so they could communicate with the battalion in the back.

As soon as they got to the front lines, a grenade landed right beside them. Gonsalves immediately threw himself on top of it, absorbing the explosion to protect his fellow Marines. He did not survive, but the Marines with him weren’t hurt and were able to complete their mission.

The Battle of Okinawa lasted until June 22, 1945, and was an Allied success. U.S. Joint Forces secured the island and blocked the supply lanes of the East China Sea, isolating all southern islands that were still in Japanese hands.

For making the ultimate sacrifice for his country, Gonsalves was awarded the Medal of Honor. His family accepted it on his behalf on June 19, 1946. He’s the only Hispanic Marine to have earned the honor during World War II.

Gonsalves’ body was eventually repatriated to America and buried with full military honors in the Golden Gate National Cemetery in San Bruno, California. He was honored again many years later, when Camp Gonsalves, the home of the Jungle Warfare Training Center for Marines in Okinawa, was named for him in 1958.

0
Previous: A Business CFD Account for an Extra Revenue Stream: Is It Feasible?
Next: UK Seeks To Protect Children On Social Media By Banning Likes