The New York Times’ claim that furloughed Environmental Protection Agency (EPA) officials have not been able to complete “hundreds” of inspections during the government shutdown creates a false impression of where the vast majority of U.S. environmental enforcement takes place.

While it’s true EPA halted inspections of regulated facilities, The Times’ story left out an extremely important detail that left readers with the impression industry has free reign to pollute the air and water.

The Times neglected to mention a key part of environmental compliance and enforcement — state regulators carry out the vast majority of inspections.

Also, EPA’s compliance office tends to conduct most inspections in the spring and summer months, not in winter, according EPA officials who spoke to The Daily Caller News Foundation on condition of anonymity because they were not authorized to speak to the press.

In all, states are responsible for carrying out more than 98 percent of federal environmental programs designed to protect air and water quality and insure safe disposal of waste, according to the Environmental Council of the States (ECOS).

EPA maintains a public database called Enforcement and Compliance History Online (ECHO), which, among other things, tracks on enforcement and inspections carried out by federal and state officials.

In almost every regulatory category — ECHO’s data for drinking water facilities doesn’t differentiate between federal and state inspections — state officials carry out the vast majority of inspections and enforcement actions.

For example, EPA officials inspected 1,232 facilities to ensure compliance with the Clean Water Act in 2018 while states inspected 30,368 last year, according to ECHO. 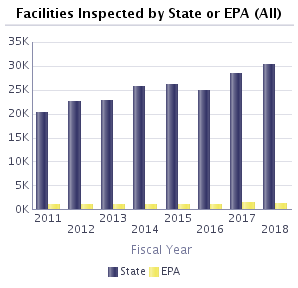 EPA still roughly 11,700 inspections every year, according to The Times. Inspections are carried out by the agency’s Office of Compliance and Enforcement (OECA).

The Times estimated “hundreds of such inspections may have already been canceled this year, with the potential for hundreds more to not take place should the shutdown continue for days or weeks more.”

The Times quoted one furloughed EPA inspector who gave the ominous quote: “Now there’s nobody out there to check if they’re complying.”

One EPA official took issue with The Times’ estimate of missed inspections, and noted that OECA conducts most of its inspections during spring and summer months, so right now is not the peak period for inspections.

“The speculation they had there, I would characterize it as misleading,” the official told TheDCNF.

Most of EPA’s roughly 600 environmental compliance officers are furloughed due to the ongoing government shutdown, which became the longest in history as of Saturday. The now 24-day partial shutdown was precipitated by a fight over funding for a U.S.-Mexico border wall.

The Republicans’ refusal to do their jobs and end the #TrumpShutdown means that @EPA inspectors can’t do their jobs: protecting American families from pollution. This toxic administration means toxic water and air for our communities.https://t.co/rUDZjKjqkz

The Trump administration came under fire last year for a drop in environmental enforcement activities, continuing a trend that started under the Obama administration.

However, EPA criminal enforcement agents are still on the job and the agency has non-furloughed agents standing by for emergencies or if the agency sees an imminent threat to public health.

An EPA official told TheDCNF that The Times’ report gave a “false view of what EPA inspectors do.” EPa inspectors often comb through records compiled by regulated facilities or do walkthroughs.

“It’s not like they regularly go out and plug leaks,” the official said. “That rarely happens.”

“It takes time for EPA professionals to review this information,” including looking through reams of documentation of facilities’ emissions or discharges to see if they were in compliance, the official said.

EPA stayed open during the first week of the ongoing government shutdown, but was forced to close its doors and furlough most of its 15,000-strong workforce when their funding ran out in late December.