The political duo that comes to mind when mentioning the movie names of Dumb and Dumber (in this case that duo is Nancy Pelosi and Chuck Schumer) thought they would take President Trump to the woodshed when they met with him for budget talks Tuesday and paraded into the White House as conquering heroes.

But, as usual, President Trump was a step ahead of these fools and had the cameras running, which put a roadblock to their presentation and made them rethink their politically slanted pitch to Trump about the budget and the southern wall that the president is so insistent on. The last thing Democrats want in their dealings with President Trump is openness and for citizens to witness their demands as they forward their anti-American agenda.

They, of course, rejected Trump’s request of $5 billion to build the wall and threatened him with “blame” for a government shutdown if he failed to accept the budget proposal they presented. But Trump met their challenge on this issue of “blame” and one-upped their threat by stating that he would accept full “blame” for any government shutdown that resulted from their denying him the money to build a wall that would protect America from invasions from the south. Our president cares about the welfare of Americans and the protection of our borders and will gladly accept “blame” for taking a position he knows most Americans agree with him on.

The threat of affixing “blame” by Chuck and Nancy is like children daring each other to perform a risky act, and is absolutely childish coming from two presumed adults doing the people’s business. The Democrat leaders of our federal legislature are playing politics with America’s national security with their I-dare-you challenge. President Trump knows he will be thanked by a majority of Americans for his shutting down of the government, if that‘s what it takes to get the wall built, and when the legislative duo of Chuck and Nancy say he is responsible for the shutdown, they will look foolish and Trump’s stature will grow taller, because “credit” is what President Trump will be rewarded with for attempting to make America safer with a protective barrier across our southern border.

I hope I’m the first American who thanks our president for looking his legislative opponents in the eye and accepting their dare to reject a continuation of the current budget and risking a government shutdown in order to have a more secure nation. 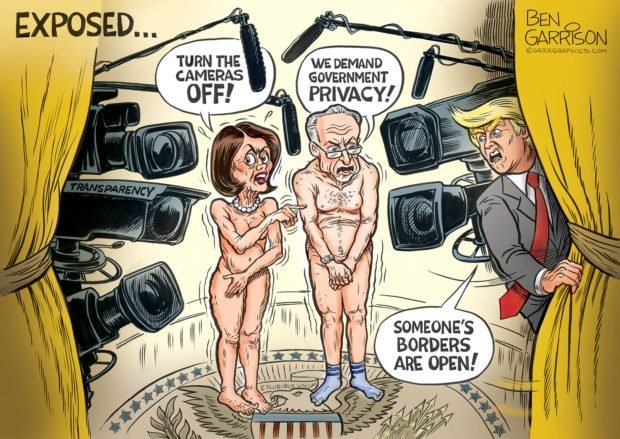 Support Conservative Daily News with a small donation via Paypal or credit card that will go towards supporting the news and commentary you've come to appreciate.
Tags
Chuck Schumer Nancy Pelosi The Border Wall