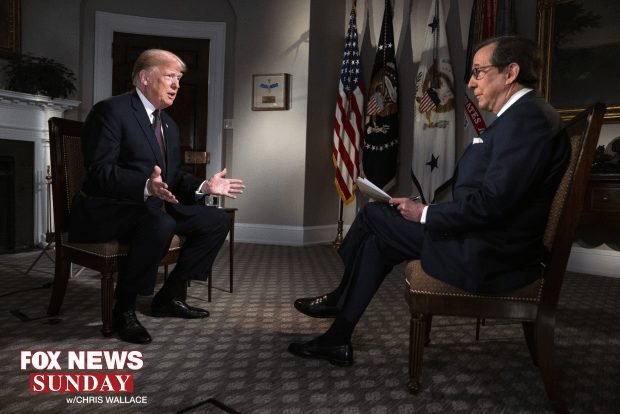 In an exclusive, wide-ranging interview to air on FOX News Sunday this weekend, anchor Chris Wallace sat down with President Donald Trump.

During the interview, President Trump discussed a wide array of topics, including: CNN’s lawsuit against the White House, the California wildfires, the appointment of Acting Attorney General Matthew Whitaker, reports that he will issue written answers to the Special Counsel, along with questions about Saudi Arabia’s role in the murder of journalist Jamal Khashoggi, and more.

Wallace specifically asks the president about a judge’s decision forcing the White House to re-issue a press pass to CNN’s Jim Acosta to which Trump answers that they are writing rules of conduct and if Acosta won’t follow those rules, they’ll throw him out again.

CHRIS WALLACE: A federal judge, who you appointed has just ruled that you must give CNN reporter Jim Acosta his press pass back. Your reaction to the ruling, sir.

PRESIDENT DONALD TRUMP: Yeah, it’s fine I mean it’s not a big deal. What they said though is that we have to create rules and regulations for conduct etc. etc. We’re doing that, were going to write them up right now. It’s not a big deal and if he misbehaves we’ll throw him out or we’ll stop the news conference.

WALLACE: What are your rules going to be? What is it that you’re saying:

WALLACE: “This is over the line and you lose your press pass.”

TRUMP: We’re writing them now. We’ll have rules of decorum you know you can’t keep asking questions. We had a lot of reporters in that room, many many reporters in that room and they were unable to ask questions because this guy gets up and starts you know doing what he’s supposed to be doing for him and for CNN and you know just shouting out questions and making statements too.  But I will say this look, nobody believes in the First Amendment more than I do and if I think somebody is acting out of sorts I will leave I will say thank you very much everybody I appreciate you coming and I’ll leave. And those reporters will not be too friendly to whoever it is that’s acting up.

In another segment, the president responds to questions on the California wildfires and his trip to the state on Saturday.

WALLACE:  What about the argument…

TRUMP:  You wouldn’t have the fires.

WALLACE:  What about the argument that it’s climate change, that it’s drier, it’s hotter and that that’s contributing to it?

TRUMP:  Maybe it contributes a little bit.  The big problem we have is management.  When I was in a certain state, I won’t say which, the governor said, “You know, we’ve tested it.  We clean out areas and we actually set the fire just to see, we lose almost nothing, we can put it out right away.  And then we leave areas unmaintained, he said, “We’ll lose 100,000 acres before you even know it.” You need forest management.  It has to be.  I’m not saying that in a negative way, a positive — I’m just saying the facts.  And I’ve really learned a lot.

The interview will air in full on Sunday, November 18th on local FOX stations – check local listings – and on FOX News Channel at 2 pm EST and 7 pm EST.

This marked Wallace’s first interview with the President since he took office in January 2017 and the second time the President has sat down for a broadcast network Sunday show interview.