So far Trump has done more than any other president in just two years, bringing unemployment down to record  lows, lowered everyone’s taxes considerably, given coal miners their jobs back that Hillary wanted to end, lowered the Corporate sales tax down to 21% from 35% and the small business tax down to15% from 35% which  stimulated our economy and brought manufacturing jobs back here from overseas that Obama said were never coming back, new pipelines are being opened and there are no more rockets being fired over Japan from North Korea.

Or do you want to live in a life of dependency on government for everyone with total government control which is how Democrats gain power if they gain the House and Senate? It’s morning in America. Trump is delivering big time. We are crushing the left and we must not let them win. We must take back our country from those traitors!!! The United States of America is the only country we got, and it’s our duty to protect our country from ALL ENEMIES, foreign and especially domestic !!!  They will set out to deliberately destroy America to try making Trump look bad, they’ve proven they don’t give a dam about anyone but themselves.  We can’t allow this to continue. They are socialists that want power in order to use the people as they wish. Tyranny and death will be the result if the socialist liberal democrats take over.

Recently Kimberly Guilfoyle was interviewed by Breitbart and she gave the following prediction if the Dems win the mid-terms, “This is going to be total lawlessness and anarchy,” added Guilfoyle. “And that’s what the Democrats want. I can’t stress enough … this is not your grandfather’s Democrat Party. This is a radicalized power-hungry party that will stoop to any low and level to destroy anybody who tries to align with this president.”

Guilfoyle described forthcoming midterms as a national referendum on President Donald Trump’s administration. Guilfoyle remarked, “With midterm elections looming in November, it is imperative that people get out there and vote.  Donald J. Trump, our fantastic president, is actually on the ballot in every way, shape, and form.

“[Democrats] want to unseat a duly elected president,” warned Guilfoyle. “They want to reverse all the accomplishments. They want to put crying Chuck Schumer in the Senate and Nancy Pelosi to head the House.”

Last Monday Trump lashed out at reporters on the treatment of Brett Kavanaugh and Trump then claimed that Democrats would turn American into the crumbling socialist country of Venezuela, “I think a lot of Democrats are going to vote Republican, because I have many friends that are Democrats,” Trump said.  “The main base of the Democrats have shifted so far left that we’ll end up being Venezuela. This country would end up being Venezuela,’ Trump said.

To those that are voting come November, here’s a short version of the Democrat platform. It should look and sound familiar because they talk about it all the time…

How to create a social state by Saul Alinsky:

There are eight levels of control that must be obtained before you are able to create a social state. The first is the most important.

1) Healthcare – Control healthcare and you control the people.

2) Poverty – Increase the poverty level as high as possible; poor people are easier to control and will not fight back if you are providing everything for them to live.

3) Debt – Increase the debt to an unsustainable level. That way you are able to increase taxes and this will produce more poverty. )

4) Gun control – Remove people’s ability to defend themselves from the government. That way you are able to create a police state.

5) Welfare – Take control of every aspect of people’s lives (food, housing and income).

7) Religion – Remove the belief in God from the government and schools.

8) Class warfare – Divide the people into the wealthy and the poor. This will cause more discontent and it will be easier to take from (tax) the wealthy with the support of the poor. If this isn’t what you want, then don’t vote for a Democrat!!!!

This is virtually identical to the Communist Manifesto.

Whether it is the unlawful plots at the FBI and the Justice Department to frame an innocent President Trump, the weaponization of the IRS to silence conservatives, or the theater of the absurd at the confirmation hearings for Judge Kavanaugh, the left’s dirty tactics are now a threat to our liberty and democracy.  There is not an institution that has not been impacted.

There should be hell to pay for those who destroy a man’s life and family with unsubstantiated, meritless allegations in their quest for political power.

Even before Justice Brett Kavanaugh was sworn in on Saturday, Democrats were looking for ways to remove him from the bench.

Their new plan of attack is to try for his impeachment, questioning his judicial temperament and ability to make fair, unbiased decisions. A petition to impeach Kavanaugh has circulated hundreds of progressive groups already, gathering more than 125,000 signatures. These groups have also raised money to fund the impeachment effort, NBC News reported.

“An accused sexual predator who committed perjury by repeatedly lying under oath to the Senate Judiciary Committee has no business being a judge — period,” Heidi Hess, co-director of the liberal group CREDO Action, a progressive group responsible for organizing the impeachment petition.

Democrats are relying on the upcoming midterm elections. Rep. Jerrold Nadler, D-N.Y., said if the Democrats retake the House in November, he would become the chairman of the House Judiciary Committee, and as such, he would re-open an investigation into Kavanaugh.

Recently columnist  Hugh Hewitt listed some of Trump’s accomplishments so far in just two years. As President Trump’s first two years in office come to a close, we’ve seen two originalist justices confirmed to the Supreme Court, 26 originalist appeals court judges confirmed, 10 more nominated, and 41 new district court judges on the bench and dozens more pending. Add to that: the repeal of the sequester on defense spending and a massive military rebuild underway; a massive tax cut of unprecedented depth and structural change; a renegotiated trade deal between the United States, Mexico and Canada; withdrawals from the awful Iran deal and, in effect, the absurdist Paris accord; the rollback of job-killing and bureaucrat-empowering regulations by the hundreds; an economy surging while unemployment drops to 3.7 percent ; and a new entente in the Middle East (one that arose despite U.S. recognition of Jerusalem as the capital of Israel) that sees the United States and Israel aligned and cooperating closely with Egypt, Saudi Arabia, Jordan, United Arab Emirates, Kuwait, Bahrain and now a new government in Iraq against the expansionist Iranian theocrats.

Did I mention the devastation and defeat of ISIS in its physical “caliphate”?

During November’s midterm elections, we can elect new leaders who will stand up for the rule of law and vote out those whose actions support the left

So the choice is up to you dear voter this November. Do you want freedom or slavery to the forces of Big Government?  Democrats want open borders, do away with ICE, impeach Trump and Kavanaugh and take away your tax cuts. The left needs chaos to exist and in the absence of it, they will simply make it. Think about it. 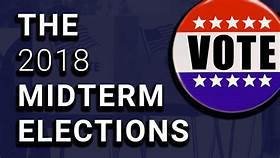 Support Conservative Daily News with a small donation via Paypal or credit card that will go towards supporting the news and commentary you've come to appreciate.
Tags
the 2018 Midterm Elections