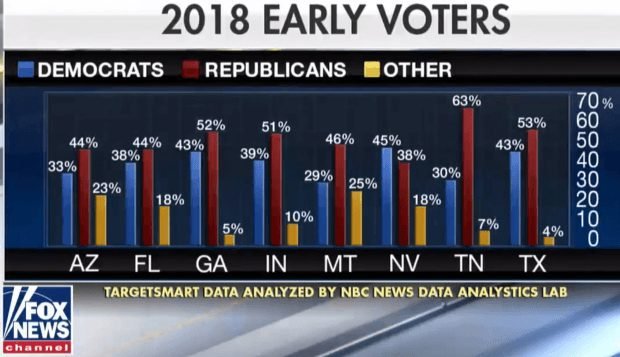 New analysis by NBC News shows that Democrats aren’t the most enthusiastic voting group in the 2018 midterm elections and could point to a repeat of 2016.

Out of the eight states critical to the “Blue Wave,” Democrats only out-voted Republicans in one, Nevada and not by very much.

Kayleigh McEnany, the GOP national spokeswoman, announced that returns for Republicans are looking better than even 2016.

In Florida, Republican absentee ballots are outpacing Democrats by 52,062‼️ @GOP ballot requests and returns are also beating 2016 & 2014 records. At this point in 2016, 41.7% of returns were Republican. In 2018, returns are up with 44% of returns being Republican‼️ pic.twitter.com/QJfNMKUOgk

These early voting totals could point to a repeat of 2016 where polls and forecasts were destroyed when the results came in. Republican and Independent voters who favor Trump don’t trust the media or polling and tend not to respond to either. This leads to incorrect weightings in polls such as the recent Vanderbilt poll on the Tennessee election that showed Brederson (D) ahead of Republican Marsha Blackburn by one point. That poll had a Republican +5 weighting in its population parameters. That means that the poll’s results would be indicative if 5% more Republican voters showed up than Democrat voters. In Tennessee early voting, GOP voters outnumber Democrats by a whopping 33% – that poll is useless and it won’t be the only one that misses the mark in the midterms.

2016 was littered with polls and pollsters forecasting a comfortable win for Hillary Clinton – a landslide in most cases. 538’s Nate Silver didn’t see any path for Trump even as late as November 8th, 2016 – election day.

Over the weekend, Mr. Silver seemed to hedge against his prediction that the House would easily go to Democrats.

STEPHANOPOULOS: What are the biggest X-factors that increase the uncertainty in your model?

SILVER: It is turnout, I mean it’s – turnout is always difficult for pollsters to forecast and the fact that you have a lot of districts that have not had competitive races in a long time, turnout’s even more difficult to forecast there than in a state like Florida for example.

Yes, and judging by early vote totals, the turnout advantage is going to the Republicans. Turnout, the Kavanaugh Effect, 4+ GDP, wage increases, lower taxes, all pave the way to a red wave:

Ultimately, midterms are usually low-turnout affairs in which the outcome depends on which party’s base is more energized to show up. There’s no question that the Democrats’ base is revved up. But the strong economy, the backlash to the Kavanaugh hearings, and the underestimated strength of the Trump movement may effectively counter the Resist movement. It’s also plausible that the GOP message of results will resonate with independent voters and “Reagan Democrats” in crucial swing districts. With a little more than two weeks to go before the election, despite the pundits’ skepticism there’s still a path for the GOP to hold the House.

It’s too early to claim victory though. You need to be part of the victory ride and get to the polls, send in your absentee ballots, vote early. Oh and make sure your conservative friends remember to vote too. There is too much at stake.

Support Conservative Daily News with a small donation via Paypal or credit card that will go towards supporting the news and commentary you've come to appreciate.
Tags
the 2018 Midterm Elections