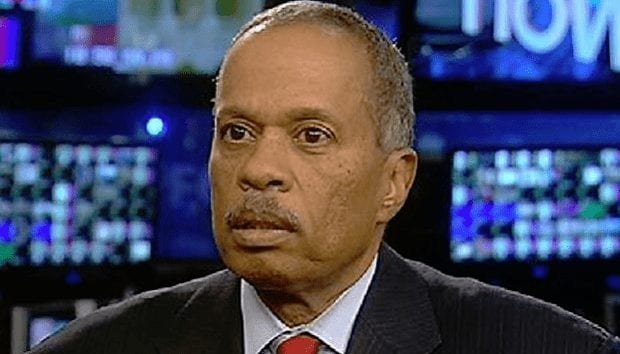 Fox News co-host, on-air contributor and political pundit Juan Williams wrote an entire article to tell America that the Senate does not accurately represent America, Trump didn’t really win, and that we should be governed by political polling … or something. Mr. Williams, that’s not how it works, that’s not how any of this works.

Williams starts out quoting another ill-informed progressive, Cook Political Report editor David Wasserman, who also appears not to understand the differences between the House of Representatives and the Senate.

“A majority of the Senate now represents just 18 percent of the nation’s population,” Wasserman wrote in an editorial for the New York Times.

Juan then piled on to Wasserman’s faux-logic:

“Think about this — America’s politics are being run by a cabal in the Senate that fails to represent 82 percent of the American people.”

Well, Mssrs. William and Wasserman, the Senate is not now and was never intended to represent the people in proportion to their population. Two Senators are awarded to each state so that every state, regardless of population, has a say in how the country operates. But, for the sake of argument, let’s take apart the more detailed arguments Juan pushes.

For starters, the 18 percent controlling the Senate have their own right-wing agenda beyond protecting an unpopular president.

They want a Supreme Court majority that reflects their views and not the views of the majority of the people.

Hmm, so, as a good progressive, he’d like nothing more than to have New York City, Los Angeles and Chicago decide the balance of a court that should have no interest but protecting the liberties of the people and entities in all fifty states and the outlying territories. The court isn’t supposed to bend to the political will of a majority – ever. That’s why the Senate, equally representing each of the states, decides who does or does not enter the federal judiciary. One last point on the judiciary issue: Juan, you can thank Democrats, led by Harry Reid for the success that Trump et al are enjoying in appointing constitutional conservatives to the courts. Democrats struck down the 60-vote filibuster threshold for nominees in 2013 using the so-called “nuclear option” that only requires a simple majority to end debate on a nominee. Republicans followed that example and haven’t looked back.

Next, Juan continues his laughable attack on the workings of our government, as dictated by The U.S. Constitution, by complaining, again, that Trump didn’t win the popular vote in the 2016 election.

“Remember that both Gorsuch and Kavanaugh were nominated by a president who lost the popular vote by almost three million votes,” Juan whines.

Mr. Williams, if the presidential election was decided by a popular vote, then Trump would have structured his ground game, political strategy, locations for his rallies and overall messaging to make sure that he got more votes than Hillary, but, that’s not how it works. The Donald put together an election strategy designed to win the most electoral votes – and he succeeded. Trump won by 74 electoral votes – 306 to 232. Mr. Williams should take his frustration on Hillary or the DNC whose identity politics and echo-chamber attitudes failed to win an election.

Juan completes his trilogy of wrong-headedness by advocating for direct democracy where major U.S. policy is concerned.

Then there is the tyranny of GOP tax cuts.

The 18-percent-Senate-majority passed tax cuts that overwhelmingly benefit the wealthiest one percent of Americans.

Forty-six percent of Americans disapprove of the Trump tax law, according to Quinnipiac polling.

An August Fox poll found that ObamaCare is now more popular than the Republican tax cuts. More than half of voters, 51 percent, favor ObamaCare compared to 40 percent who approved of the tax cuts.

That finding is bolstered by another poll, a CNBC survey from June, which found that 49 percent of working American adults — a plurality of all the people polled — said they do not have more take-home pay because of the law.

How about the president’s aggressive focus on border security?

Again, a majority in the Fox poll said they disapprove. Overall, 57 percent of Americans disapproved of Trump’s handling of immigration policy.

Umm, Mr. Williams, we are a constitutional republic, not a pure democracy. Polls, surveys, man on the street segments are interesting, but hardly a good way to run a country. The tyranny of the majority, which Williams spent an entire editorial advocating for, is exactly what the framers of the Consitution worked to prevent and, judging by Juan’s 865-word whine-fest, they have been successful.

So sorry Juan, but a large swath of America does not want New Yorkers, Californias or Chicagoans deciding major policy for them and they certainly understand just how underthought your article is.

Support Conservative Daily News with a small donation via Paypal or credit card that will go towards supporting the news and commentary you've come to appreciate.
Tags
2016 Presidential Election juan Williams Supreme Court Justices the Electoral College The U.S. Senate