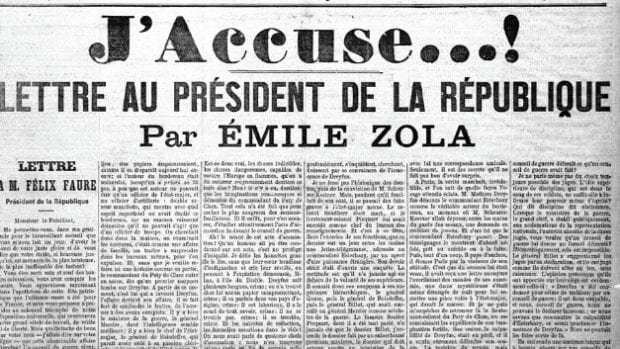 note: all quotations of Émile Zola’s work are from an English translation of the original J’Accuse

Much like Émile Zola did in his open letter, J’Accuse, to President Félix Faure of the French Republic in 1898, we must publicly denounce the unsubstantiated claims the Democrats, as a party, have levied unfairly at Judge Brett Kavanaugh and the unfair manner in which they have conducted his nomination process.

Zola argued on behalf of Alfred Dreyfus, a French artillery officer wrongly accused of treason – a travesty known as the Dreyfus Affair. Zola’s letter aptly accused the French government of wrongful accusation and prosecution in 1898.

Nola’s letter begins with reticence and respect towards the French Republic informing them that their glory “is threatened by the most shameful and most ineffaceable of blemishes.” Perhaps because the letter is addressed to the President, who Nola sees as uninvolved. Unfortunately, I can’t do the same. Democrats have no such glory – their history is an ongoing blemish on truth, justice and the American way. They would willfully destroy a person, a father, a husband, a respected jurist – just to further a political agenda. They are without conscience and the allegations without substantiation – just as those against Dreyfus were which Nola protested loudly:

“Ah! the nothingness of this bill of indictment! That a man could be condemned for this act, is a wonder of iniquity,” Nola wrote in words hauntingly relevant to the attack on Judge Kavanaugh. “And the naiveté of drafting formal assertions in a vacuum!”

No witnesses, no police report, no evidence, the contradiction of fact in the allegation and other statements – none point to guilt. The Democrats case is built on the statement of a vehement anti-Trump, liberal college professor – and nothing else.

Nola, in the body of his letter, presents a series of facts showing how wrong the government’s case was. Not to out-Nola Nola, but I’ll distill some facts about the Kavanaugh’s accuser down to a simple table. (Related: Compare and Contrast Kavanaugh and Accuser’s actions – someone’s hiding something)

Democrats appear to be orchestrating this entire controversy. The links to them are so strong that should they back-off or it is proven to be the conspiracy that it surely is, they should all fall – or, in Nola’s words:

Once again, [they] cannot restore his innocence without all the High Command being guilty. Also the offices, by all conceivable means, by press campaigns, by communications, by influences, protected Esterhazy only to convict Dreyfus….

Sen. Dianne Feinstein has even said that she’s not sure that the allegations are true, but that has not stopped the Democrats utilization of the media to shout down as bullies anyone calling Ford’s claims into question. Evil’s use of the biased media is nothing new. Nola even wrote in his letter that “it is a yet another crime to have [pressed on ?] the filthy press, to have let itself defend by all the rabble of Paris, so that the rabble triumphs insolently in defeat of law and simple probity.”

In the concluding segment of his letter, Nola calls out those responsible for the miscarriage of justice against Monsieur Dreyfus. It is time the same be done against those who are now heaping evil upon a decent man:

I accuse Sen. Dianne Feinstein as a diabolic workwoman of the miscarriage of fairness through the guiltiest and most absurd of machinations.

I accuse the media as the hands of the devil for its complicity, non-probity, and an indolent lack of investigation into the allegations.

I accuse the Democratic party members of the Senate Judiciary Committee of carrying out an abominable press campaign, particularly in the The New York Times, in the Washington Post, on CNN and NBC News, to mislead the public and cover their fault.

Finally, I accuse the public for condemning a defendant with unrevealed evidence, and I accuse Democrats of covering up this illegality, by order, by committing in their turn the legal crime of knowingly defaming an innocent man.

While I have no fear of criminal prosecution as Nola did in his time, his closing words hold such relevance that I’d rather not modify them:

As for the people I accuse, I do not know them, I never saw them, I have against them neither resentment nor hatred. To me, they are only entities, spirits of social evil. And the act I am hereby accomplishing is only a revolutionary means to hasten the explosion of truth and justice.

I have only one passion, that of the light, in the name of humanity which has suffered so much and is entitled to happiness. My ignited protest is nothing more than the cry of my heart. So may one dare bring me to criminal court, and may the investigation take place in broad daylight!

Dreyfus was eventually cleared of all wrong-doing, but not until 1906. The Democrats only need this to work for … about six weeks.

Support Conservative Daily News with a small donation via Paypal or credit card that will go towards supporting the news and commentary you've come to appreciate.
Tags
Brett Kavanaugh Democrats Emile Nola