Theatrics and politics are constant companions, and this week’s appearance of Facebook founder Mark Zuckerberg before a congressional committee was almost entirely theater. It was for show, both by the politicians who use their questions and comments to posture for their supporters and feed their confirmation biases, as well as for Zuckerberg, who climactically fell on his sword in a mea culpa moment.

The reason for the high drama was precipitated by a third-party harvesting user data from the social-networking behemoth. As explained in Fortune earlier this week, “During the summer of 2014, the U.K. affiliate of U.S. political consulting firm Cambridge Analytica hired a Soviet-born American researcher, Aleksandr Kogan, to gather basic profile information of Facebook users along with what they chose to “Like.” About 300,000 Facebook users, most or all of whom were paid a small amount, downloaded Kogan’s app, called This Is Your Digital Life, which presented them with a series of surveys. Kogan collected data not just on those users but on their Facebook friends, if their privacy settings allowed it — a universe of people initially estimated to be 50 million strong, then upped to 87 million. The app, in its terms of service, disclosed that it would collect data on users and their friends.”

Cambridge Analytica in 2014 was working for Ted Cruz, the erstwhile GOP presidential candidate. The data gathered by Kogan was to facilitate Cruz’s ascension to the Oval Office. Clearly, Cambridge Analytica was not the genius organization that Barack Obama’s techno-wizards were in 2012. Because in 2012, the Obama campaign harvested the data on all U.S. Facebook users – about 150 million. 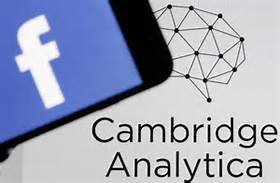 Also, Cambridge Analytica should have taken the Obama approach – simply pilfer and mine the data, from cooperative liberal Facebook organization. Facebook users were not given the choice of their data being shared with Democrat Party operatives in 2012. Users opted in, but all of the data was was simply pilfered. At least Cambridge Analytica disclosed to users that they were going to have access to their data and would used it for “commercial” purposes. And users willingly downloaded their app, and granted the firm access to their data and friends. About 85 million total, it appears.

You may be wondering how we know about the Democrats basically being given the Facebook data in 2012. Well, they told us. And not only did they tell us, but they bragged about it, and they were lauded by the mainstream media for their “genius.”

On June 7, 2015, Carol Davidsen, who was a tech guru for the Obama campaign, made a presentation at the Personal Democracy Forum in New York City. She said, “Facebook 2012 Election had the ability for people to opt in. The Obama campaign, like, rocked this, right? We got people to opt in. And the privacy policies at that time on Facebook were that if they opted in, they could tell us who all their friends were, okay? So they told us who all their friends were. This is very much how local campaigns work, right? People sit in a room. It’s a really small thing. All of their biggest supporters surround the table, and they, like, circle the names of the people that they know and that they’re gonna outreach to. And they figure out how to fill in the gaps of the people that they don’t know. The Obama campaign just did this on a digital — in a digital level, on a much larger level. But we were actually able to ingest the entire social network, social network of the U.S. that’s on Facebook, which is most… That’s most people.”

Did you catch that last revelation? “But we were actually able to ingest the entire social network, social network of the U.S. that’s on Facebook…”

Davidsen continued her boasting, “That freaked Facebook out, right? So they shut off the feature. Well, the Republicans never built an app to do that. So the data is out there. You can’t take it back, right? So the Democrats have this information. So when they look at a voter file and someone comes to them, they can immediately be like, ‘Oh. Here are all the other people that they know, and here are people that they can help us persuade because they’re really good friends with this person.’ The Republicans do not have that information and will not get that information, right? Now there’s a disadvantage of information that to me seems unfair. But I’m not Facebook. So this is the reality.”

I find it extremely hard to take someone seriously when they talk like they’re in junior high, with “like,” “okay,” and “right?” in every other sentence.

As if not to be outdone, Obama’s campaign manager, Jim Messina, bragged in a speech on April 30th, 2013, at the Milken Institute’s 2013 Global Conference. During a panel discussion entitled, “In the twenty-first century, data is king,” Messina bragged, “We decided on the first day of the campaign to use data across department, uhh, because it was obviously the best avenue to the truth. And we ended up using data to inform almost every major decision we did in the campaign. And we had a singular goal to run a personalized campaign where you got a different campaign than you did, uh, all based on our ability to move you and persuade you to vote and support Barack Obama. And there’s 332 electoral votes that shows it worked.”

He continued, “We built this thing called targeted sharing. It allowed us to use Facebook to persuade people. We spent a billion dollars to figure out a simple truth: What your friends and family and neighbors say is more important to your consumer decisions and your political decisions than anything else, because you’re getting so much data thrown at you. So the final six days of the campaign, six million people logged on to Facebook through BarackObama.com and they saw a 20-second Michelle Obama video (’cause everyone loves Michelle Obama) and at the end of the 20 seconds, we had matched our data with their data. And we gave them five of their best friends who are undecided voters and said, ‘Click here to send them a video, click here to send them information.’ Of those people, 78% of them voted for Barack Obama.”

After Davidsen’s revelations, the New York Times lauded the Democrats for their “genius” because they figured out how to access the data of every American Facebook user. They were praised for it!

To summarize, the Democrats (a political party) in 2012 harvested all of the data of all U.S. Facebook users. They weren’t informed their data was being mined, or shared. Democrat operatives bragged that the Republicans didn’t have, or know how to use, the data, and that they would never have it. The data were used to successfully elect a Democrat.

Then, in 2016, a research company pays users to download an app that gathers user data. When users acknowledged the “terms” of the app, they granted assent for their data to be sold (“commercial purposes”). The candidate that hired the research company (Ted Cruz) was unsuccessful in his bid for the presidency. The data gathered may have been used marginally by the successful Republican nominee in the general election.

Clearly the 2012 mining of Facebook user data was much more egregious, clandestine, and surreptitious than the 2016 iteration. And it was much more vast and inclusive. So why all of the uproar over the 2016 data versus the 2012 version? The only obvious difference is that the Democrats can do it and be praised, and if the Republicans do it, they’re vilified by the media. And, in 2012, the media’s messianic candidate won, and in 2016, their villain did. In 2012, Messina and Davidsen were “geniuses.” In 2016, Cambridge Analytica is evil.