It may not even be a blip on the radar screen of those who control the Democratic party but it is no longer any secret that the Dems have a very serious problem when it comes to embracing one of the biggest anti-Semitic hatemongers in America.

Nation of Islam leader Louis Farrakhan and his ties to a number of members of the Congressional Black Caucus is no longer a dirty little secret that can be kept on the down-low, especially after that picture of former President Barack Obama yukking it up with the sinister minister was published several weeks ago. 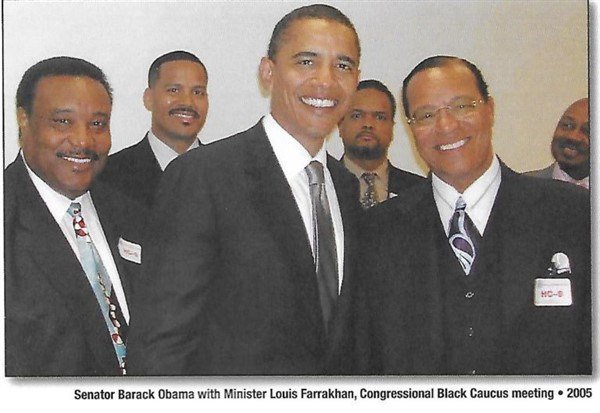 Subsequently, two pieces in the Wall Street Journal pointed out that numerous African-American member of Congress including Al “Impeachment” Greene and Maxine Waters had a cozy relationship with Farrakhan. Also implicated was DNC vice-chairman Keith Ellison who secretly met with Farrakhan and Iranian President Hassan Rouhani in 2013.

The Anti-Defamation League demanded that Ellison explain and apologize for palling around with a notorious anti-Semite and the Republican Jewish Coalition just called for the resignation of Waters, Ellison, Greene and other CBC members who have ties to Farrakhan.

Here's @RepMaxineWaters greeting @LouisFarrakhan in New Orleans in 2006 to talk strategy. I write about the meeting in Tuesday's @WSJopinion: https://t.co/Z3w9cpLTnf pic.twitter.com/DvVJqBCDf9

Ellison has continued to play it off – saying that none of his Democratic colleagues are complaining – but was just hit with the dreaded Four Pinnochios by the Washington Post for his fibs about his relationship with Farrakhan.

Now, the RNC is formally calling for Tom Perez to address Ellison’s relationship with a Jew hater.

Anti-Semitism has no place in American politics. Tom Perez must address this issue.https://t.co/0B2g5sxHaS

“Keith Ellison’s long pattern of lies about his ongoing relationship with Louis Farrakhan, who the Anti-Defamation League calls ‘America’s leading anti-Semite,’ has put a stain on the Democrat Party,” said Chairwoman McDaniel. “Anti-Semitism has no place in American politics, Tom Perez must address this issue.”

The media won’t cover this, they are intent on sniffing at Stormy Daniels’ soiled panties and other than CNN’s Jake Tapper who blasted Farrakhan, there is the sound of crickets.

It isn’t only the media either. Twitter has been on an absolute rampage censoring conservatives and Trump supporters but has no comment on why a vile racist pig and virulent anti-Semite like Farrakhan doesn’t get the same treatment.

The answer is that Silicon Valley is down with this crap because it fits into their overall agenda of the promotion of anti-Americanism as long as it benefits the Democrats. It would hardly behoove them were they to start equally applying their arbitrary rules because they have already whored themselves out.

As for the CBC members who have enjoyed cordial relationships with this fiend, it’s long overdue that they are held to account for their condoning of his bigotry and should either apologize or resign.