The Latest News about Keith Ellison 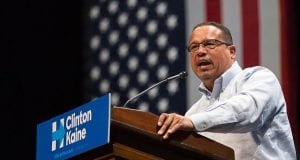 Minnesota Democratic Rep. Keith Ellison is sitting behind his Republican opponent Doug Wardlow for attorney general by a seven-point margin, just less than two weeks before the November 6 midterm elections.

END_OF_DOCUMENT_TOKEN_TO_BE_REPLACED

Democrats Refuse to Cut Their Ties With Hatemonger Farrakhan

Donn Marten March 13, 2018 Comments Off on Democrats Refuse to Cut Their Ties With Hatemonger Farrakhan It may not even be a blip on the radar screen of those who control the Democratic party but it is no longer any secret that the Dems have a very serious problem when it comes to embracing one of the biggest anti-Semitic hatemongers in America. Nation of Islam leader Louis Farrakhan and his ties to a number of members ...

END_OF_DOCUMENT_TOKEN_TO_BE_REPLACED 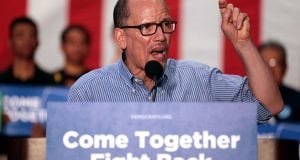 New DNC Chairman Tom Perez has weathered much criticism of his leadership and fundraising abilities and has apparently decided that the best defense is a strong offense. Perez – an establishment hack and Obama stooge – owes his job to the faction of the Democratic party that sought to keep Minnesota radical Keith Ellison out of the top spot following ...

END_OF_DOCUMENT_TOKEN_TO_BE_REPLACED

With the midterm elections just over a year away and the wheels coming off of the Democrat clown car, some are pre-blaming Tom Perez for the coming electoral debacle. Perez was installed by Obama loyalists to hold off Bernie Bro Keith Ellison, a radical firebrand and loose cannon who would transform the DNC after Debbie Wasserman Shultz turned it into ...

END_OF_DOCUMENT_TOKEN_TO_BE_REPLACED

Democrat Congressman Keith Ellison continues to be one of the most radically left members of his party and a guy who needs to grow a bigger mouth to accommodate his feet. In one of the most outlandish analogies yet, Ellison compared illegal aliens to Jews that were being hunted down by the Nazis during World War II. What’s next? Claiming ...

END_OF_DOCUMENT_TOKEN_TO_BE_REPLACED Anything short of the installation of Bernie Sanders meat puppet Rep. Keith Ellison (D-MN) as the top dog at the DNC wasn’t going to go over well with the radical left. The Minnesota congressman made a perfect Trojan Horse for the watered-down version of communism that Brother Bernie had preached to his flock but the establishment wasn’t going down without ...

END_OF_DOCUMENT_TOKEN_TO_BE_REPLACED

The extreme Left has not given up. Despite all the facts proving the need for continued nuclear deterrence and for a large, modern American nuclear deterrent, the extreme Left – led by Reps. Keith Ellison (D-MN) and Ed Markey (D-MA, now a Senate candidate), the left continues to work to disarm America unilaterally. Purporting to want to solve the problem ...

END_OF_DOCUMENT_TOKEN_TO_BE_REPLACED

Minnesota Congresswoman Michele Bachmann is in the news again and under fire for her unflinching criticism of the government for its adoption of Muslims associated with terrorist affiliated Muslim Brotherhood as advisors for Homeland Security. A scathing letter addressed to the Inspector General of the DHS specifically names three individuals used as advisors to the DHS, granting them high level ...

END_OF_DOCUMENT_TOKEN_TO_BE_REPLACED

Representative Keith Ellison has a problem (or 2) with money in politics. In a recent op-ed for the Huffington Post, the co-chair of the Congressional Progressive Caucus blames “big money” (aka: corporations and super PACs) for Republican Governor Scott Walker’s recall win in Wisconsin. He announced plans to introduce a constitutional amendment to overturn the Supreme Court ruling on Citizens United which he claims allows ...