It’s been said that death was a good career move for Elvis, it remains to be seen if Steve Bannon’s Watch–Me–Burn–Down–My–Career Tour will be equally favorable for his future prospects. The coverage of his quotes and leaks in Michael Wolff’s new book ‘Fire and Fury: Inside the Trump White House’ has been nothing short of incendiary. 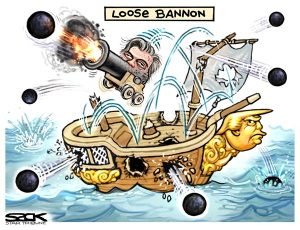 So far this week Bannon has alienated President Trump, driven away his largest financial backer and made himself look delusional by thinking he could successfully run for president. He now joins another Breitbart.com alumnus, Milo Yiannopoulos, in the firm of Persona Non-Grata and Partners.

Right now, the only way Bannon could possibly make the situation worse would be for him to start dating Kathy Griffin or ask to borrow her Trump head.

Trump is on the roster of people who thought he wouldn’t win the election. That goes a long way toward explaining why he broke his first promise to his voters and didn’t self–fund the campaign. Trump doesn’t back losers. According to Wolff, his goal was to become even more famous and then cash in on his increased notoriety after the election and make Trump enterprises even bigger.

No wonder his campaign was composed of a thin veneer of consultants on top and large numbers of enthusiastic rally attendees at the bottom, with mostly nothing in between. Trump was happy with the adulation of the masses, the attention of the media and the consternation of the entrenched political class.

Trump was liberated by his low expectations.

What the Opposition Media overlooks is the narrative of no expectation for victory completely undermines the ‘colluded with Russia to win’ fantasy. If a steely-eyed Trump was telling his meager staff to win at all costs, well it’s Putin on line #1. But if the campaign was a lark, an ego trip and a roadshow then it makes no sense for Trump to be looking to Moscow for help in beating Crooked Hillary.

The motive for collusion vanishes. Trump’s references to Russia and email were laugh lines at rallies and debates that grim, humorless, Trump–hating reporters purposely choose to take literally. Trump in the book was on a fun-filled romp — insulting other Republicans, attacking Hillary and generating unprecedented news coverage — that was going to conclude on election night.

He would have one last rally that night, claim Hillary stole the election and then start exploiting his newfound fame. Much of the staff planned on doing the same thing. According to the book, “The candidate and his top lieutenants believed they could get all the benefits of almost becoming president without having to change their behavior or their worldview one whit.”

A vote margin of under 10 points for a candidate with Trump’s negatives, would be impressive and help build the client list.

Colluding with Russia, on the other hand, would have been work. Serious business like that requires planning and long-term strategy, which were not a characteristic of the Trump campaign.

And that leads me to the tragedy of the book and the campaign.

A candidate who didn’t think he would win, won a stunning victory because he ran on issues that resonated with Americans who were tired of being told their beliefs were hateful or backward. These citizens were sick of being treated with thinly–veiled contempt by political, academic and corporate elites who intended to change the US whether they liked it or not.

These voters stayed with Trump through thick and thin and delivered an Electoral College victory. If Trump had been a candidate who left discussions of female anatomy exploration to experts like Harvey Weinstein and Matt Lauer, there’s an excellent chance he could have won the popular vote, too.

Reestablishing the rule of law, protecting borders, putting America First, protecting the unborn and rolling back the cultural depredations of the left are important issues and Trump’s victory may be the last chance conservatives will have. If his feckless approach to governing doesn’t deliver on his promises or Trump is forced out of office, no foreseeable Republican presidential candidate will embrace those issues.

It will be one complacent, country club Republican after another. A failed state of affairs that will make Trump’s outraged response to Bannon’s comments become poignant. Trump said his “historic victory…was delivered by the forgotten men and women of this country.”

A failed presidency or one that betrays his promises will guarantee they remain “forgotten.”