Kathy Griffin has either lost her mind or is interviewing to become Jihadi John‘s replacement.

Griffin is known for her over-the-top attempts at humor but her latest publicity stunt may instead be a test of her sanity. The comedienne teamed up with celebrity photographer and director Tyler Shields to create some sort of video. Out of that project, they released a dark and twisted image that looks more like an ISIS recruitment poster than a publicity stunt. The photo shows Griffin staring into the camera with a deadpan look as she holds up a prop intended to be the bloody, disembodied head of President Donald Trump. 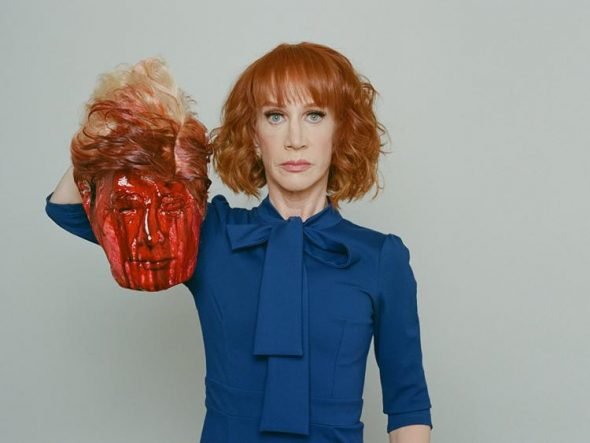 “Kathy is all about pushing the limits and she went above and beyond on this one. Now let’s just hope she stays out of jail,” a representative for Shields told HuffPost.

At a minimum, she and Shields should expect a visit from the Secret Service.

During the video, Kathy says “It’s ok because we’re going to go to prison – federal prison.” To which Shields says “yeah, yeah.”

At the end of the video, Griffin performs a ‘drop the mic’ with the fake Trump head.

If Kathy wants Jihadi John’s job, she’s going to need to dress a bit different, but otherwise, she looks the part. Oh, and Kathy, the U.S. military killed Jihadi John in 2015 – that comes with the job.

Using Twitter, Kathy Griffin has apologized for what should have been obvious to anyone and was certainly obvious to everyone that reacted to it.

“I sincerely apologize,” Griffin said in a video apology. She said she “crossed the line” and is “just now” seeing the outpouring of negative reactions to the photo,” adding “The image is too disturbing.”

Now that apology might have come from pressure from many of her social media followers – or just one:

On it! @SecretService has a robust protective intelligence division that monitors open source reporting & social media to evaluate threats

Threats made against @SecretService protectees receive the highest priority of all of our investigations. #ProtectionNeverRests

Support Conservative Daily News with a small donation via Paypal or credit card that will go towards supporting the news and commentary you've come to appreciate.
Tags
Jihadi John Kathy Griffin Tyler Shields