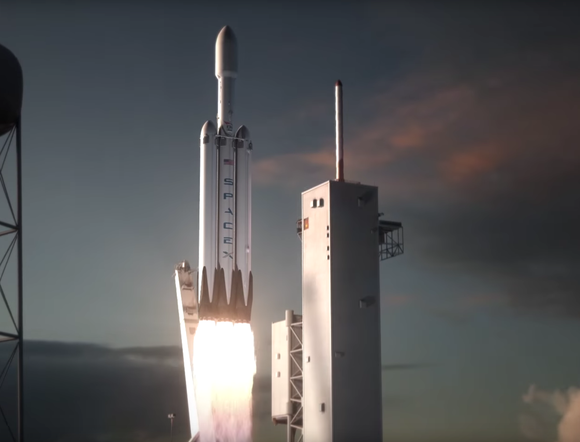 update: He really did it. Elon Musk’s midnight-cherry Tesla Roadster is in outer space – see the video HERE.

SpaceX and Tesla chief Elon Musk announced Friday evening that the first payload for the Falcon Heavy rocket would be his personal Tesla Roadster – “if it doesn’t blow up.” Just 24 hours later, it’s no longer clear if Musk was serious or just creating fake news for the science and technology reporting community.

“Payload will be my midnight cherry Tesla Roadster playing Space Oddity,” Musk tweeted. “Destination is Mars orbit. Will be in deep space for a billion years or so if it doesn’t blow up on ascent.”

Falcon Heavy to launch next month from Apollo 11 pad at the Cape. Will have double thrust of next largest rocket. Guaranteed to be exciting, one way or another.

Payload will be my midnight cherry Tesla Roadster playing Space Oddity. Destination is Mars orbit. Will be in deep space for a billion years or so if it doesn’t blow up on ascent.

But hours after reports of Musk’s bizarre intentions made the pages of science and technology sites, Musk said that he “totally made it up.”

Perhaps Musk drunk tweeted the original story? Who knows, but just imagine a generation 1 Tesla Roadster orbiting our red sister-planet and booming David Bowie from the stereo. Ok, yeah, I know, sound can’t travel in a vacuum, but it beats the hell out of “Blue Danube”.

The Bowie reference is perhaps foreshadowing. Musk himself has said that the first Falcon Heavy launch may end in disaster or fail to achieve Earth orbit, much less complete a Hohmann transfer and head for Mars.

“Space Oddity” is the legendary David Bowie song about a space mission that appears to go wrong.