Despite narratives by contemporary textbooks, the earliest of Thanksgiving celebrations were established to acknowledge the hand of God, and give thanks to Him, for deliverance and His mercy. The holiday continues today as a subtle reminder of our dependence on God for the blessings we enjoy as Americans for our freedom and those who have stood as defenders of that freedom and attendant liberties and rights. It also serves as a gentle reminder that our founding fathers feared not the presence of religion in society and even government, but rather a repressed exercise of religion.

In mid-December of 1620, The Pilgrims, Calvinist Protestants, arrived at the coast of present-day Massachusetts, and conducted the first “thanksgiving” ceremony with a prayer service thanking God for safe arrival in the New World.

After a devastating winter which claimed the lives of nearly half of the 102 faithful in search of religious freedom, the Pilgrims, with the assistance of the neighboring Wampanoag Indians, reaped a rich harvest which they gladly shared with the Wampanoag.

Investors funding their endeavor demanded they incorporate a egalitarian economic model where all crops and property were held in common, in order to return half of their produce to their overseas backers. After two years of a socialized economy, Plymouth was in danger of failing as a result of famine, blight, and drought. Even practicing the carefully directed cultivation practices of the Wampanoag failed to deliver them from their plight. Colonist Edward Winslow wrote, “The most courageous were now discouraged, because God, which hitherto had been our only shield and supporter, now seemed in his anger to arm himself against us.” 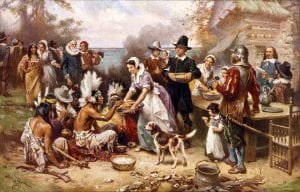 The Pilgrims realized how dependent they were on deity for their very survival, and set aside a “solemn day of humiliation, to seek the Lord by humble and fervent prayer in this great distress,” according to Governor William Bradford. As an affirmation of their faith, by that evening, the skies darkened, and a slow, steady rain ensued, providing a powerful witness to the Indians of faith in God, the Great Spirit, and a reaffirmation of the same for the Pilgrims. Governor Bradford noted, “And afterwards the Lord sent to them such seasonable showers, with interchange of fair warm weather as, through His blessing caused a fruitful and liberal harvest, to their no small comfort and rejoicing. For which mercy, in time convenient, they also set apart a day of thanksgiving.”

Edward Winslow recorded the Pilgrims’ reaction as believing “it would be great ingratitude, if secretly we should smother up the same, or content ourselves with private thanksgiving for that, which by private prayer could not be obtained. And therefore another solemn day was set apart and appointed for that end; wherein we returned glory, honor, and praise, with all thankfulness, to our good God, which dealt so graciously with us…” This was the original American Thanksgiving Day, centered not on harvest feasting but on gathering together to publicly recognize the favor and provision of Almighty God.

Bradford’s diary recounts how the colonists repented of their socialistic financial folly and “At length, after much debate of things, the Governor (with the advice of the chiefest amongst them) gave way that they should set corn every man for his own particular, and in that regard trust to themselves; in all other things to go in the general way as before. And so assigned to every family a parcel of land, according to the proportion of their number.”

After converting to a capitalist system, the Pilgrims production and success far exceeded their expectations, and began trading their surplus with neighboring Indian tribes. As news of their success spread across Europe, Puritans who had been persecuted throughout England migrated en masse to the American northeast. The Great Puritan Migration brought hundreds of thousands of immigrants seeking religious freedom and a stable temporal existence. 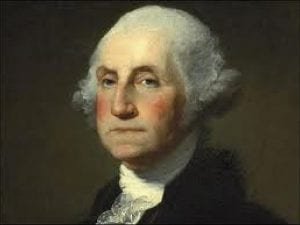 Over the course of the next 150 years, autumnal Thanksgiving celebrations became commonplace throughout New England. However, in December of 1777, in the midst of the Revolutionary War, General George Washington ordered a day for “public Thanksgiving and Praise, and duty calling us devoutly to express our grateful acknowledgements to God for the manifold blessings he has granted us.” He ordered “all officers and soldiers, whose absence is not indispensably necessary, to attend with reverence the solemnities of the day.” The Continental Congress, acknowledging the need for a warring country’s continuing grateful entreaties to God, proclaimed yearly Thanksgiving days throughout the Revolutionary War from 1777 through 1783.

After ratification of the Bill of Rights, the first formal action of the newly formed United States of America was a resolution of thanksgiving. Congress recommended that citizens “gather together and give thanks to God” for the blessings bestowed upon their fledgling nation.

Presidents George Washington, John Adams, and James Madison followed the custom of declaring national days of gratitude. It wasn’t until another perilous juncture in American history, the Civil War, when the next President declared a national day of thanksgiving. President Abraham Lincoln invited “the whole American people to observe a day of thanksgiving and praise to our beneficent Father…with humble penitence for our national perverseness and disobedience.”

Congress set a permanent date of the fourth Thursday of November for a national day of Thanksgiving in 1941.

It is proper for us, indeed, requisite of us, to look to the past to gain appreciation for the present and perspective for the future. While Thanksgiving Day is the formal recognition of our gratitude to the Almighty for our temporal blessings, we should acknowledge throughout the year our heartfelt indebtedness for our freedoms and the country that was founded on principles of individual inalienable rights.

Cicero philosophized that “Gratitude is not only the greatest of the virtues, but the parent of all of the others.” Considering the dearth of virtues in our society today, the need for gratitude has never been greater.

I’m convinced that many of the social and cultural problems we face today are the result of a loss of a collective sense of gratitude. Rather than being grateful for what we have and the blessings that we enjoy, although sparse they may sometimes seem to us, we focus on what we don’t have, or what we think we deserve or we’re entitled to. This lack of gratitude is concomitant with narcissism and self-centeredness, and reveals a deep character flaw; absence of humility.

In my estimation, no one has captured this sentiment better than a former president of the LDS Church. Gordon B. Hinckley said some years ago, “Our society is afflicted by a spirit of thoughtless arrogance unbecoming those who have been so magnificently blessed. How grateful we should be for the bounties we enjoy. Absence of gratitude is the mark of the narrow, uneducated mind. It bespeaks a lack of knowledge and the ignorance of self-sufficiency. It expresses itself in ugly egotism and frequently in wanton mischief….

May we make of this Thanksgiving season a true season of thanksgiving. Be grateful. Truly grateful, and humility and a host of other virtues can follow. And not just grateful to our fellow man, but perhaps most significantly, to God. Our founding fathers and the Pilgrims have shown us how.

Support Conservative Daily News with a small donation via Paypal or credit card that will go towards supporting the news and commentary you've come to appreciate.
Tags
Gratitude Thanksgiving