The Defense Department admitted Thursday that its press operation had “erroneously” retweeted a message calling for the resignations of President Donald Trump and Senator Al Franken. 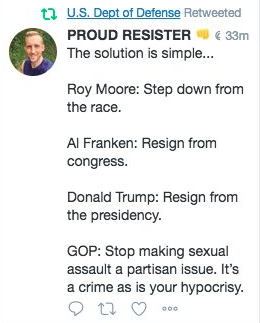 One of the people operating the DoD’s Twitter account was at fault according to a quick explanation issued by the Pentagon.

An authorized operator of the @DeptofDefense’s official Twitter site erroneously retweeted content that would not be endorsed by the Department of Defense. The operator caught this error and immediately deleted it.

It’s impossible to know exactly how the operator “erroneously” retweeted a militant anti-Trump account, but an educated guess might be that the person follows Proud Resister on their personal Twitter account, uses something like Tweetdeck or Hootsuite to manage multiple accounts and accidentally retweeted from their personal account to the DoD account (yes, that can happen.) The DoD’s chief spokesperson is a civilian, Ms. Dana White, and the “operator” may also be non-military and therefore explain the lack of attention to detail and disregard for the commander-in-chief. Ms. White also served on John McCain’s 2008 presidential campaign team.

Support Conservative Daily News with a small donation via Paypal or credit card that will go towards supporting the news and commentary you've come to appreciate.
Tags
the Department of Defense The Pentagon Twitter