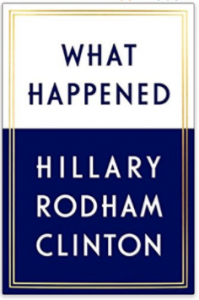 Hillary Clinton‘s new book What Happened is being sold at a 40% discount to the publisher’s suggested price.

Clinton’s newest book is being heavily discounted by book retailers on its first day on sale in hopes of selling the books instead of having to box them up and send them back to the publisher.

Amazon.com has the book listed at $17.99 for the hardcover, which the publisher had suggested should sell for almost $30.00.

Her newest book is following the trend seen with her previous publication attempts.

Clinton’s 2016 offering, Stronger Together sold only 2,912 copies in the first week.

Clinton likely received a large advance that publishers will struggle to ever make back. Consumer reviews of her book are mediocre to poor and the sudden discounting is indicative of poor sales.

That won’t keep Hillary from making a buck. She has launched a book tour where tickets can reach upwards of $2,375 per seat.

“It is standard for high-profile authors to do book tours that sell tickets to events, but Clinton’s tour takes it to a new level of greed,” an industry source told Fox News.

Support Conservative Daily News with a small donation via Paypal or credit card that will go towards supporting the news and commentary you've come to appreciate.
Tags
Hillary Clinton Politics What Happened