The liberal mayor of San Juan, Puerto Rico, Carmen Cruz, this week turned the massive recovery effort in her state into a political opportunity.

Cruz said on Friday that she wanted to “make sure somebody is in charge that is up to the task of saving lives” after FEMA asked her to list her priorities so that they could properly direct aid. Her response was as expected from a progressive: a politically motivated, irresponsible display of someone with the inability to lead.

“Well, where have you been?” she exclaimed. “I have been very respectful of the FEMA employees. I have been patient but we have no time for patience anymore.” Although it is unclear how impatience helps. The disaster is due largely to the failure of local and state government to upgrade the infrastructure on the island in decades past.

The Wall Stree Journal’s Mary Anastasia O’Grady told Fox News that “the political class in Puerto Rico failed to provide basic services to the people.” But that’s not the story the Mayor is telling and the media prefers the ‘Trump screwed up’ narrative to the truth.

President Donald Trump responded to Cruz, pointing out her lack of leadership.

“Such poor leadership ability by the Mayor of San Juan, and others in Puerto Rico, who are not able to get their workers to help,” he tweeted. The president pointed out that leaders like Cruz pound their desks and demand action instead of getting out into the community and encouraging it.

Cruz’s language has a negative effect on the community and the 10,000 federal employees and military members in the territory. It is important to encourage locals to get out and help with the recovery as many did when Hurricane Harvey submerged much of Houston, Texas. Vitriolic criticism is demoralizing and her comments are in direct opposition to the territory’s Governor who clearly understands that encouragement and hopefulness are more helpful than dramatic, desperate rants on television.

“We’re very pleased with the communication with the president, with the administration…we’re working as one team,” Governor Ricardo Rossello told CBS News.

And a Puerto Rico resident agrees:

For those saying Trump / Fed Gov isn’t doing anything for PR: You obviously aren’t in PR. The airports are filled with AC-130’s, govn’t planes of troops and aid workers, ospreys, and commercial flights offloading Nat. Guard workers before taking out civilians. All of this with a non-functioning / non-powered airport (no control tower – all operations are being run out of Miami!). You complain there’s not enough commercial flights to get people out and you complain there’s not enough aid being flown in. There’s only 1 runway and it’s being run with no power. The island is surrounded with the USCG ships, have rescue helicopters flying overhead all day, army (or reserves) cleaning all the streets to allow gas deliveries, and constant escorts of fuel trucks to gas stations. They paused the Jones Act for a couple days to allow direct fuel and supply deliveries (and are in meetings today about a more long term repeal ). The Fed Gov committed to pay 100% of all debris removal on the island (and USVI). And just FYI, PR doesn’t pay any federal income taxes and never has (you know, the stuff used to pay for these relief efforts).

If you were actually on the island, you would see the amazing working being done by everyone that lives there. I was stunned with how quickly everyone was able to clean up after this disaster. Puerto Ricans aren’t incompetent people. There’s 3.4 mil people on the island filled with skilled laborers that are kicking ass getting things stabilized.

Yes, Puerto Rico needs help and aid, but if there’s one thing I know without a doubt, is that it’s citizens know how to handle hurricanes! No single person, or government can fix this level of disaster overnight. It’s going to take some time. So be grateful that you’re not there and that you have running water and a house to sleep in. Bashing a government for not doing what you think is best when is reality you have no idea what’s going on is counterproductive to those that are actually helping. Unless you’re in Puerto Rico, you have NO CLUE what it’s like and what’s happening. Why? Because communication is out around 98% of the island. You’re hearing about single events promoted by media for ratings in isolated areas.
Stop bitching. Start helping.

Apparently, the local residents are better journalists than those that work for the mainstream media.

The Trump administration’s latest action, waiving the Jones Act, came just hours after Puerto Rico’s governor requested it. While the waiver won’t improve the aid effort, it shows the responsiveness of the federal government to Puerto Rico’s needs but San Juan’s Mayor and the mainstream media are using the unprecedented devastation in Puerto Rico as a political tool against Trump.

To the people of Puerto Rico:
Do not believe the #FakeNews!#PRStrong🇵🇷 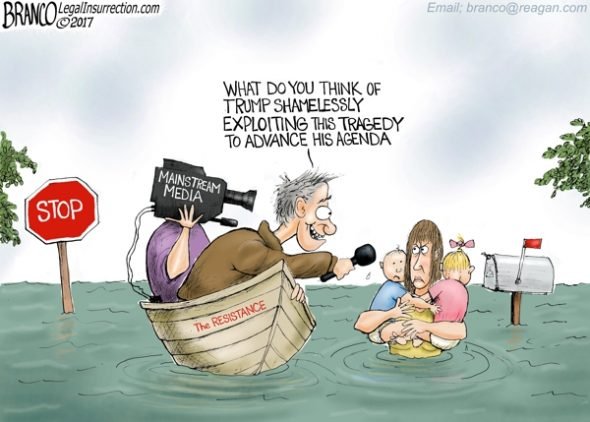 Support Conservative Daily News with a small donation via Paypal or credit card that will go towards supporting the news and commentary you've come to appreciate.
Tags
Carmen Yulin Cruz Maria Puerto Rico