Remember when candidate Donald Trump promised when he was president, “We’re going to win so much. You’re going to get tired of winning.”?

Evidently, the president pooped out before we did.

The latest issue where President Trump is too tired to win is DACA: Deferred Action for Childhood Arrival. This unconstitutional Obama fatwa ordered immigration authorities to give work permits, green cards, implied future citizenship and a stolen identity to illegal alien children brought here by their equally illegal parents. 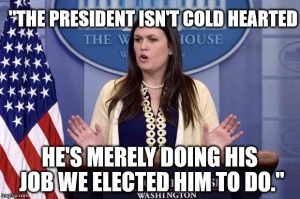 The fact this particular subset of the illegal alien invasion is composed of children is supposed to make normally clear–thinking conservatives all dewy–eyed and sympathetic.

And I am sympathetic. I think it would be cruel to make these illegals fly back to their own country on Spirit Air, so taxpayers should be willing to spring for a ticket on United.

But there ends my sympathy.

Adhering to the rule of law is a difficult topic for leftists to grasp since race, class and ideology take priority and their law enforcement is subject to outside circumstance and political popularity. For those who think laws should apply equally to everyone, the concept of “Fruit of the Poisonous Tree” is relevant here.

Cornell defines it as, “A doctrine that extends the exclusionary rule to make evidence inadmissible in court if it was derived from evidence that was illegally obtained. As the metaphor suggests, if the evidential “tree” is tainted, so is its “fruit.”

The same rule should apply to DACA. When the parents cross the border and break the law the children shouldn’t benefit from their crime.

The left’s response is always “they were children and didn’t know the law was being broken.” Fine, the kids didn’t know dad shoplifted the Xbox either, but they don’t get to continue playing Grand Theft Auto when the cops arrive.

So if those kids forfeit an Xbox worth under $500, why should illegals be allowed to keep benefits worth vastly more?

[Curious note: Both the shoplifter parent and the illegal parent claimed they broke the law because they “wanted to give their families a better life.”]

We owe nothing to DACA participants wrapped in Mexican flags and burning US flags, while demonstrating the aggressive dependency that characterizes much of the immigration controversy. Their beef is with lousy parents who took a gamble and lost.

The issue shouldn’t really be this difficult for Republicans to understand either. We had a referendum! Out of the 14 serious candidates for the 2016 Republican presidential nomination, nine were in favor of giving DACA participants US citizenship or some form of amnesty. And guess what? Not one of the nine gained the nomination or won the presidency.

The guy that won promised to end DACA on Day One.

Waffling on DACA is the vote loser because it betrays Trump’s base.

Republican appeasers are recycling the same arguments voters soundly rejected 2016. They fear applying the law equally will ruin Republicans with Hispaniards for generations. What else is new? Ethnic supremacy groups have been holding funerals for the GOP since the turn of this century and the corpse keeps leaping up from the grave.

When Republicans do cave in to illegal alien demands, the party realizes no benefit. Ronald Reagan signed the bill that granted citizenship to 3 million illegals and they rewarded him by voting Democrat.

In this week’s frenzy to cater to minor criminals two polls supposedly show overwhelming support, but the data, like GOP open border sellouts, can’t be trusted.

The questions are misleading. In the Politico poll, supposedly proving “overwhelming” support for DACA, there are no specific conditions listed, only “certain requirements,” which is polling fantasy.

That’s like asking if the Cleveland Browns will win the Super Bowl if the team “meets certain requirements.”

The NBC poll is equally doctored. DACA delinquents are termed “undocumented immigrants” instead of the understandable “illegal alien” in a sleazy attempt to boost support.

Sen. Lindsey Graham (R–Appeasement) claims the decision on DACA is a “defining moment” for Republicans. He’s right, but not in the way he thinks. Fact is these moochers had quite a run in the US. They attended schools they didn’t pay for, demanded green cards they didn’t merit and took welfare benefits they didn’t deserve. Now it’s time to say thanks go home.

Graham, and now Trump, appear to be embracing a DACA “fix” that keeps illegals in the US while causing a mass exodus of conservatives from the GOP. It’s a victory for the left, parasitic businesses and Republican swamp leeches.

There’s already a “fix” that keeps a Trump campaign promise and begins solving our immigration problem. That “fix” is ending DACA.

Support Conservative Daily News with a small donation via Paypal or credit card that will go towards supporting the news and commentary you've come to appreciate.
Tags
DACA Illegal immigration