Ultra-rich athletes and team owners in California are leading a non-sensical protest against America by kneeling during the National Anthem and the gesture is as stupid as the supposed cause.

The San Fransisco 49’ers, Golden State Warriors, and now the Oakland Athletics, all San Fransisco area teams, have team members who have taken a knee or supported the move in protest of the nation that made it possible for them to become so wealthy.

No one begrudges them their right to protest, but seriously, at work? If you went to work and began lecturing customers on why abortion is wrong, how long do you think your job would last?

While California teams take the headlines, other teams are following in their misplaced footsteps. Last month, the Cleveland Browns had 12 players disrespect the flag, anthem, and nation by kneeling and staring at the ground while the Star-Spangled Banner played.

The president said Sunday morning, once revenues and ratings take a serious hit, owners will have to act.

If NFL fans refuse to go to games until players stop disrespecting our Flag & Country, you will see change take place fast. Fire or suspend!

Some over-hyped basketball players have taken issue with the president’s comments on the matter.

Stephen Curry, a Golden State Warrior basketball player, told reporters that he was considering not going to the White House after which, the president rescinded his invitation to him.

Going to the White House is considered a great honor for a championship team.Stephen Curry is hesitating,therefore invitation is withdrawn!

To which Cleveland Cavaliers forward LeBron James decided to chime in with a hateful, divisive comment calling the president a bum.

U bum @StephenCurry30 already said he ain't going! So therefore ain't no invite. Going to White House was a great honor until you showed up!

“U bum,” James tweeted adding “@StephenCurry30 already said he ain’t going! So therefore ain’t no invite. Going to White House was a great honor until you showed up!”

Kneeling during the National Anthem, turning their backs on the flag and making awful comments when they get criticized displays a childishness indicative of someone that plays a kids’ game for a living. It’s also turning sports fans off in droves.

Here is a picture that was taken at Thursday night’s San Fransisco 49’ers game. 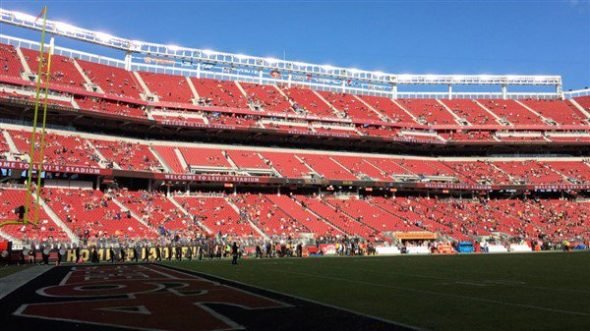 Surely the stands filled up by the second quarter, right? Sorta… 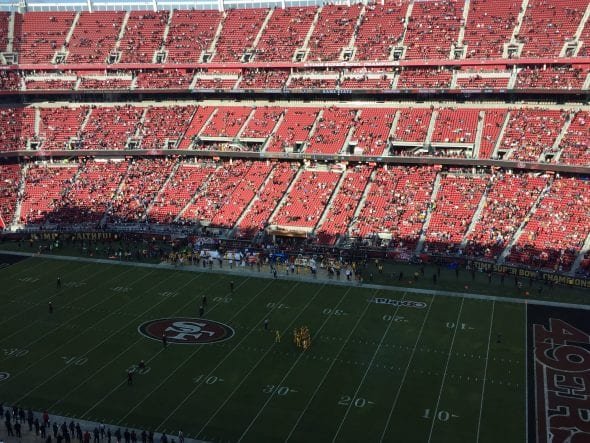 Fans at home have tuned out as well. Last Sunday night’s game between Green Bay and Atlanta saw a drop of 11% in viewership over last year. Week one showed double-digit ratings drops for almost every single game that was televised. As Americans tune out, revenue losses are estimated to be about $200 million by the end of the year.

How will the networks react? They could decide not to televise the anthem, which would lead to further ratings drops as fans would see it as them “taking a knee.” They will likely just keep the cameras off the players during that portion of the pre-game, but rest assured, sports photographers will snap away to capture the moment.

Kneeling as a symbol of protest is strange. Kneeling is a sign of subservience, surrender, quitting. Even in their own game of football, “taking a knee” is how one intentionally surrenders a down. The symbol is as idiotic as the cause(s). What causes you ask? Who knows, we’re all talking about them kneeling, and the athletes are fine with that.

Some fans gave the league time to reprimand players for protesting while at work, but none came. Instead, NFL Commissioner Roger Goodell lashed out at those voicing displeasure with the players’ actions.

“The NFL and our players are at our best when we help create a sense of unity in our country and our culture,” Goodell said in the statement. “There is no better example than the amazing response from our clubs and players to the terrible natural disasters we’ve experienced over the last month. Divisive comments like these demonstrate an unfortunate lack of respect for the NFL, our great game and all of our players, and a failure to understand the overwhelming force for good our clubs and players represent in our communities.”

Where was this moral outrage when Kaepernick insulted millions of veterans, patriots, and fans? When will there be action against the divisive comments and actions that disrespect this nation, its history, and its heroes?

Until then, Sunday’s are for something else. Oh, and in case these unpatriotic meatheads just don’t know how to respect the flag and nation, here are two men leading by example. 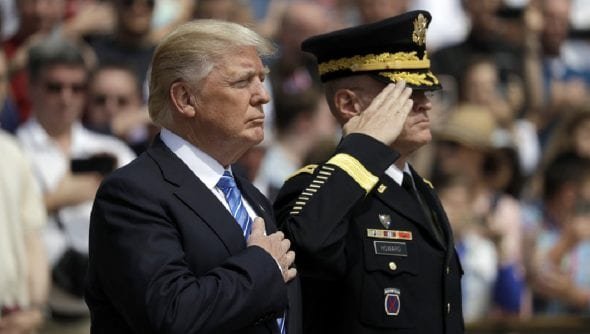 Support Conservative Daily News with a small donation via Paypal or credit card that will go towards supporting the news and commentary you've come to appreciate.
Tags
national anthem National Anthem Protests