A white rental van jumped onto a pedestrian walkway in Barcelona, Spain on Thursday killing at least 13 and injuring almost 100 others.

Around 5:30 pm local time, a large white van moved on to a pedestrian walkway in the tourist La Rambla area and sped into a crowd of people. 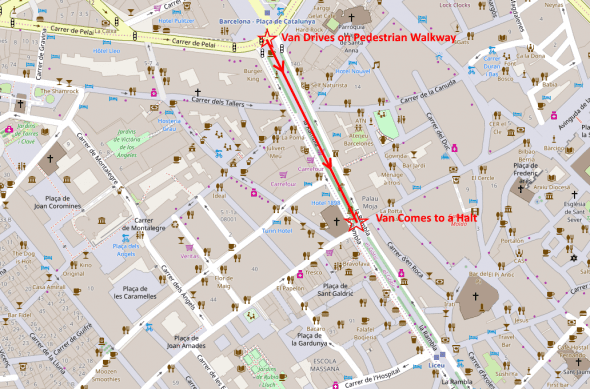 At least 13 people have been confirmed dead in the attack and at least one gunman, thought to be the driver, was reported to be holding hostages in a nearby bar. That report has now been refuted by police who said that there was never gunman holed up in a bar anywhere in the area and that the driver has been arrested.

Driss Oukabir named one of the terrorist in #Barcelona. He's from Marroco, lived in Spain, in late 20s. He's on the run pic.twitter.com/VFZCpNF0xa

Video has surfaced that appears to show some hostages leaving the bar with their hands above their heads and another video shows the supposed capture of at least one of the terrorists.

‼️ #Spain: #Barcelona #lasRamblas attack! Some Hostages beeing freed with Arms above their heads walk to the police. pic.twitter.com/kywI7mHxmc

Authorities are treating this as a terrorist attack.

Some reports say that a second van, believed to be involved in the attack, was found 40 miles away. The van has been inspected and found to be free of explosives. It is unclear if the second van was used in the attack or just served as a getaway vehicle.

It is being reported that another terror suspect was shot and killed in a shootout with police.

NFL Coach Believes that EVERYONE Should Stand for the National Anthem