Why is it that former Vice President Al Gore always conjures up an image of the latter?

The most concerted attack on the legitimately elected President of the United States to this date is raging as it prepares to hit seven days after leftist provocateurs successfully instigated a violent situation in Charlottesville.

British novelist George Orwell wrote a book on totalitarianism back in 1949 entitled Nineteen Eighty-Four or as it has come to be known 1984 in which he laid out his grim vision for a creepy dystopia where the ultimate vision for humanity was a boot stomping on a human face – FOREVER! 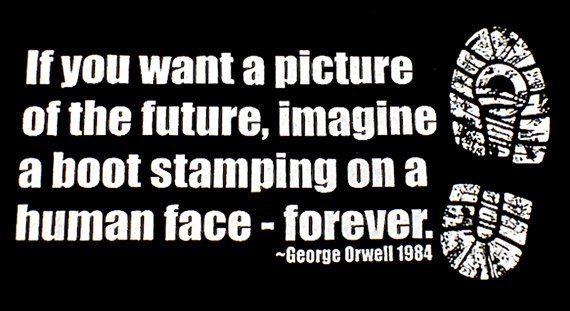 Well, we are almost there now.

In Orwell’s book, he described a state-sponsored ritual known as “Hate Week” where the propagandized population was whipped into a fury over the fictional enemy Emanuel Goldstein.

“The preparations for Hate Week were in full swing, and the staffs of all the Ministries were working overtime. Processions, meetings, military parades, lectures, waxworks, displays, film shows, telescreen programmes all had to be organized; stands had to be erected, effigies built, slogans coined, songs written, rumours circulated, photographs faked..”.

Now, none other than Al Gore himself is leading the calls for President Trump to resign after he has been pulverized by the press, stabbed in the back by his own party and most importantly – transformed into a real life version of the hated Goldstein.

But like with the global warming crisis that has failed to materialize since his movie “An Inconvenient Truth”, the sore loser of the 2000 election in which he failed to even win his home state has all the answers.

According to the Washington Examiner “Al Gore’s advice for Trump: ‘Resign’”:

Former Vice President Al Gore said his one piece of advice to President Trump would be to “resign” immediately.

Gore made the statement in a video interview published Thursday on LAD Bible, the United Kingdom’s largest entertainment website. He was there to discuss climate change and his new documentary, “An Inconvenient Sequel: Truth to Power,” which was released this month.

The interviewer asked if there was “one piece of advice” for Trump, what would it be? He responded: “Resign.”

One has to wonder whether Gore is serving as the emissary of the globalists/Deep State or as much as I hate the term -the New World Order – in giving the Trump the last chance to leave before he ends up like the last POTUS to dare to take these people on and whose brains were sprayed all over people who showed up to watch a parade in Dealey Plaza.

Support Conservative Daily News with a small donation via Paypal or credit card that will go towards supporting the news and commentary you've come to appreciate.
Tags
Al Gore Deep State globalism Media