The hatred, vitriol, and attacks on President Donald Trump by those in the biased media and elsewhere is unprecedented. Politicians and the media are publicly cursing his name as they sink to the lowest of standards because they lost and he won. The media bias is obvious. They lied about Ferguson with ‘hands up don’t shoot,’ they lied about George Zimmerman with Trayvon Martin and now they are lying about Trump. What’s bad has become good and what’s good has become bad in their world. 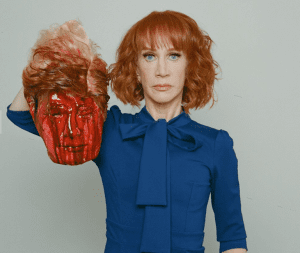 People like Rosie O’Donnell, Kathy Griffin, and Michael Moore base their opinion on the fiction coming from the ‘destroy Trump’ propaganda media and their own hateful deluded minds. A saying I once saw so aptly put it, “People have no problem believing the lies about Trump, but refuse to believe the truth about Hillary.” They like to call Trump a bully, but it is they who are the true bullies with Rosie and Kathy and some people on Saturday Night Live going after a 10-year-old Barron Trump. An adult going after a child and traumatizing him like they did is immoral. Now Kathy Griffin has the nerve to play the victim role saying the Trumps are bullying her? Give me a break!!

On Fox’s show The Five they blamed Trump’s use of four-letter words early in his campaign (which I don’t recall him doing) as the cause of everyone else in the media using them now. But if they’re going to go down that road, Hillary has a history of using a potty mouth all the way back since Bill was governor. Here are a few examples that the media censors from the public.

What Trump has done though is expose the media for the liars and deceivers that they are and turned the entire media into one big National Enquirer. There used to be a time where the media reported the news objectively. Now they create the news to fit their biased agenda. Only 40% say they trust the media now and 60% say they don’t trust them anymore. 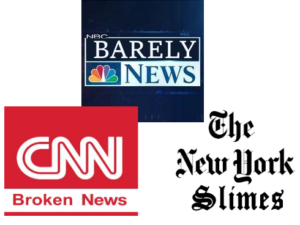 The trouble with media bias is that it is easy to see if there is a norm – a control. Fox News has played that part since its inception. “Fair and Balanced” reporting and right-leaning commentary have made it the anti-media media – and the liberal propagandists running NBC, CNN and papers like The New York Times can not let that stand. Enter: James and Lachlan Murdoch who seem hell bent on ruining the only cable news network not peddling George Soros’ libkiddy talking points.

“The goal is to destroy the Fox News Channel because that’s the only television medium that gives Donald Trump a fair shake,”  Bill O’Reilly the former FOX anchor contended. “That was the goal, and that was instituted very quickly once the president was elected. So, ‘we got to get the Fox News Channel and how we’re going to get them?  Got to take their talent out. Get the talent that matters.’”

O’Reilly also commented on Comey’s testimony before the Senate Intelligence Committee on Thursday, saying it vindicated Trump. Because Trump is now vindicated the media people who were so sure Comey was going to finish Trump off but instead cleared him of no collusion with Russia, no investigation and no obstruction of justice have caused them into a complete meltdown and wondered why Comey changed his stance. Note the hypocrisy of the media here. When he was looking into Hillary they all hated him – pundits and senators. When they thought he was going after Trump they all loved him. Now they are mad at him again.

This whole Russian collusion thing is one big lie perpetrated by Hillary’s manager John Podesta and Robbie Mook 24 hrs after Hillary lost in the hopes it would get Trump impeached and put the Dems in power and cover up their own collusion with Russia. They are the real Russian colluders.  Remember Obama’s off mic comment to Russia’s president Medvedev where he whispered ,”after my election I’ll have more  flexibility?” John Podesta’s company received 35 million dollars from Russia and his brother became a Russian agent, but never registered as such despite receiving $175,000 from Russia to lift sanctions. Hillary sold 20% of our uranium to Russia who deals with Iran who wants that uranium to make nukes to use against us, but Trump is the bad guy. The Democrats wanted Trump impeached before he even took office. They put it out to their sycophantic media friends that Trump colluded with the Russians to fix the elections.  This is typical of liberal’s ability to put the blame of their own wrongdoing on another. Now Comey’s testimony clears Trump of any colluding by saying nothing changed the election.

James Comey better hope that there are no "tapes" of our conversations before he starts leaking to the press!

Comey then told the truth: there was no collusion and no obstruction. The media asked Trump if there are any tapes and he replied, “You are going to be very surprised.”  A very clever move only a master negotiator like Trump could come up with.

In an appearance on Sean Hannity’s Fox News show Tuesday night, the President’s son, said he was shocked and appalled by the way Democrats on Capitol Hill were treating his father.

“I’ve never seen hatred like this,” he said. “To me, they’re not even people. It’s so, so sad. Morality’s just done. Morals have flown out the window and we deserve so much better than this as a country.

“You see the Democratic Party, they’re imploding,” he continued. “They became obstructionists because they have no message of their own. You see the head of the DNC, who is a total whack job. There’s no leadership there. They lost the election that they should have won because they spent seven times the amount of money that my father spent.”

Eric said the vitriol aimed at President Trump had gone far beyond the usual partisan fighting in Washington.

Maybe, depending on how it goes in 2018, the left will soon realize that while this anti-Trump thing may be great for ratings, it isn’t doing anything for their constituents.

In the meantime, why is there so much hate coming from people who are supposed to be against hate? It goes back to the 45 goals of communism for the takeover of America. Here is just a sample:

Remember ***On June 17, 1963 the U.S. Supreme Court concluded that any Bible reciting or prayer, in public schools, was deemed unconstitutional.*** And today in several states they have ISLAM being taught!!!

This whole Trump attack is being orchestrated by Obama, Hillary, Podesta, the Democrats and their sycophants in the media. Meanwhile, Trump keeps plugging along finding jobs for America, trying for better healthcare, lowering taxes and getting America moving again. Something the Democrats have no plan for and no message.