House Majority Whip Steve Scalise (R-LA) was shot Wednesday morning by a man with a rifle while practicing for a baseball game in Alexandria, Virginia.

Scalise was shot in the hip during a 10-minute shooting rampage in which more than 50 rounds were fired. The Congressman was airlifted to a local hospital where he was listed in critical condition.

“[Rep. Scalise] was transported to MedStar Washington Hospital Center, where he underwent surgery,” a statement by Scalise’s office said. “Prior to entering surgery, the Whip was in good spirits and spoke to his wife by phone. He is grateful for the brave actions of U.S. Capitol Police, first responders, and colleagues.” After the surgery, Scalise’s condition was listed as critical. 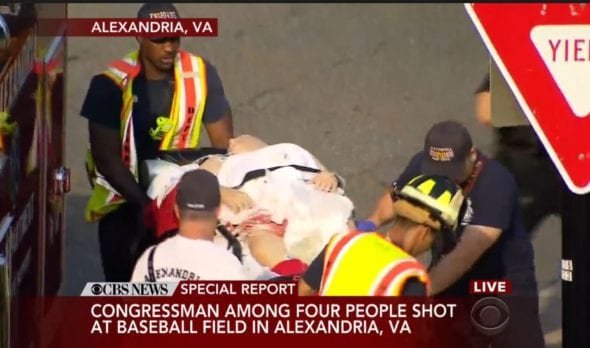 The attack was finally ended when a member of Scalise’s security detail, who had also been hit, shot the gunman, identified as 66-year-old James T. Hodgkinson, who has now died from his injuries.

UPDATE: Suspect is in custody and not a threat. PIO will be onscene shortly to share updates.

Four others were also injured – two members of Scalise’ security detail and one staff member and the shooter. Their conditions are unknown.

Only Republicans were in attendance as Democrats were practicing at a separate facility. A man approached the field asking whether the players were Democrats or Republicans shortly before he opened fire which may offer a motive.

The man was wearing running clothes, asked Duncan: "Are those Republicans or Democrats out there practicing?" Per source familiar.

If not for the security detail’s actions, this could have been much worse.

“I think we’re lucky that Scalise was there because this was his security detail, without them it would have been a massacre,” said Senator Rand Paul (R-KY) who had been taking batting practice at the time of the shooting.

Chief Michael Brown of the Alexandria Police Department told reporters that at 7:09 AM they received a report of shots fired at Simpson Park on East Monroe. Three minutes later, three APD officers arrived on scene. Two Alexandria Police officers engaged the shooter along with two members of the Capitol Police who were serving as Scalise’s security detail. The Chief also mentioned that due to the fact that Members of Congress and assault on federal officers was involved, the FBI is taking the lead in the investigation.

FBI Special Agent-In-Charge Tim Slater told reporters that the FBI got involved at 9:30 AM, but offered no details on the investigation. The FBI have not yet identified the shooter nor the weapon he used. One witness has said that he saw an AK-style rifle with a curved magazine.

Here is the entire roster of 2017 Congressional baseball team. @ChrisMurphyCT only CT rep. He is tweeting. #Alexandria #Virginia #shooting pic.twitter.com/4WKKUtch4X

The White House then released a statement from President Trump on the shooting.

The Vice President and I are aware of the shooting incident in Virginia and are monitoring developments closely. We are deeply saddened by this tragedy. Our thoughts and prayers are with the members of Congress, their staffs, Capitol Police, first responders, and all others affected.

Scalise has undergone three surgeries as of June 19, and his condition has improved to “serious.”

Support Conservative Daily News with a small donation via Paypal or credit card that will go towards supporting the news and commentary you've come to appreciate.
Tags
Alexandria Shooting Steve Scalise Virginia