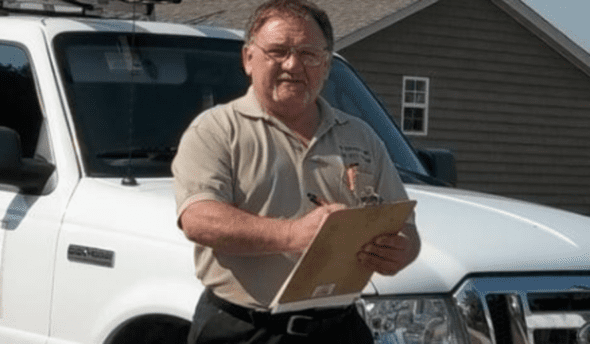 Hodgkinson, 66, was shot and killed by Capitol Police officers after he had sprayed a GOP baseball practice with more than 50 bullets.

Hodgkinson owned a home inspection business but his license expired in late 2016.

A Twitter account matching his name, hometown and occupation shows activity until April 5th when it went dark after only 7 tweets. His tweets paint him as a far-left extremist. 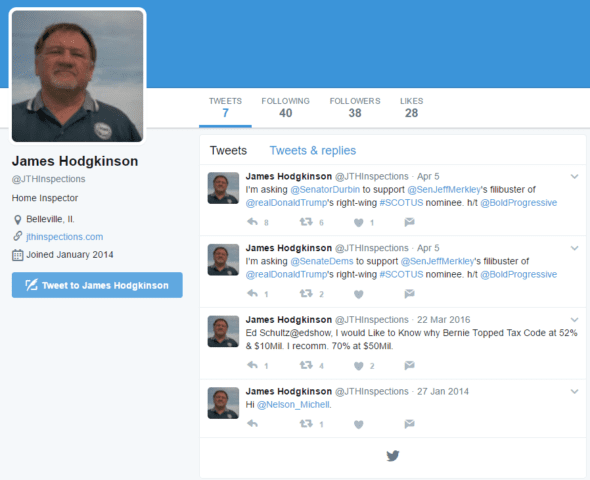 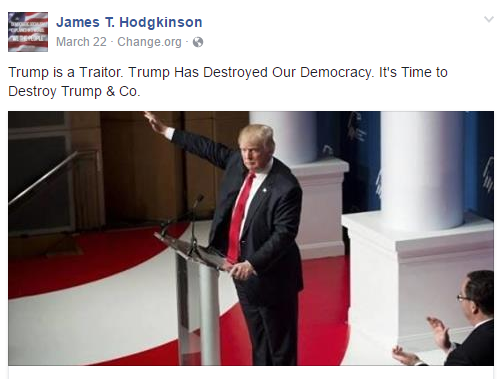 The Miami Herald reports that Hodgkinson also posted an angry post on Facebook two days ago directed at President Trump.

“I Want to Say Mr. President, for being an ass hole you are Truly the Biggest Ass Hole We Have Ever Had in the Oval Office,” he wrote on Facebook.

His Facebook page is headed by an image of Bernie Sanders and an image espousing democratic socialism.

Hodgkinson belonged to a number of anti-Republican groups including “The Road to Hell is Paved with Republicans” and “Terminate the Republican Party.” 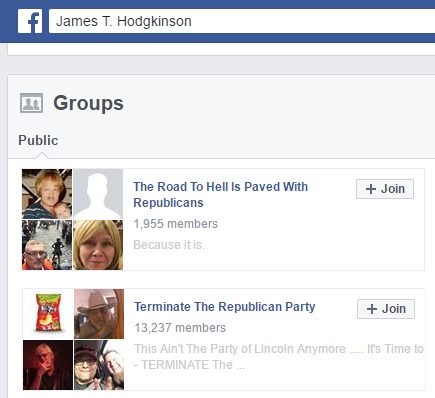 Authorities arrived at his Belleville, Illinois home just shortly after the President announced that the shooter had died.

Looks like authorities have showed up. Hodgkinson is reportedly dead. pic.twitter.com/nRrQHeWwGe

Hodgkinson’s wife Sue still lives in the house but was reportedly still at work when authorities arrived. She told ABC News that James had been living in Alexandria for the last two months. He left in April without saying a word to his wife or daughter as to why he was leaving. He just packed up and left. 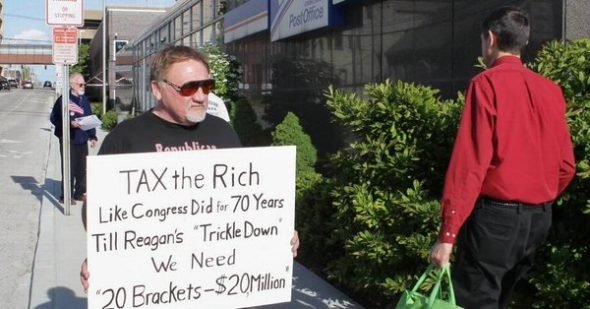 The Belleville News-Democrat posted several letters to the editor they had received from Hodgkinson. None had violent language or anything even remotely threatening, but all were consistent in promoting ultra-left tax and income equality policies. Here are some excerpts from those letters.

“If I seem to be a broken record, it is because of the simple facts that need to be understood by everyone of voting age. I just want to let everyone know that income inequality was a factor in the causes of the Great Depression as well as the greed of Secretary of Treasury Andrew Mellon under the Republican Presidents Harding, Coolidge and Hoover.”

“I don’t want a president who will lower taxes on the rich and raise them on the other 99 percent.

I don’t want a president who wants to lower the number of tax brackets when everyone with a brain knows we need more tax brackets in order to reach all classes of income.”

“I read the other day about a man blaming President Barack Obama for food stamp recipients going up from 26 million to 46 million. Anyone with a knowledge of the facts would know that this is because of former President George W. Bush, and his ruining our economy. He got us into two wars that we couldn’t afford and gave all his rich friends tax breaks.”

“Let’s vote all Republicans out of Congress, and get this country back on track.”

“You see, we have always had a progressive tax system. In fact, in 1932 we had 55 brackets ranging from 4 percent to 63 percent. Everyone paid 4 percent for the first $4,000 income, which would amount to more than $50,000 today. The top marginal tax bracket was 63 percent for all income of more than $1 million, which would amount to more than $12 million today. Now I think everyone would like to see the rich and the super rich taxed at a higher rate.”

“I would wish all people under an annual income of $1 million to get behind the 99 percent, and back the push for tax reform. My motto is: “Tax em like 1938.”

“I believe to stimulate the economy, it is time to legalize or at least decriminalize marijuana use.”

Support Conservative Daily News with a small donation via Paypal or credit card that will go towards supporting the news and commentary you've come to appreciate.
Tags
Alexandria James T. Hodgkinson Shooting Virginia