Freshman Rep. Moira Walsh had an unusual explanation for some of the bad lawmaking in her state capital during an interview on Rhode Island’s WPRO, “It’s the drinking that blows my mind. You cannot operate a motor vehicle when you’ve had two beers but you can make laws that effect people’s lives forever when you’re half in the bag?” 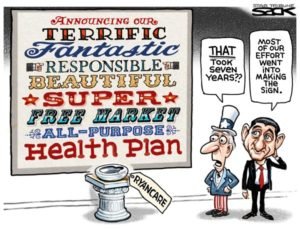 Too bad Moira isn’t in Congress. Booze would be a more acceptable explanation for Paul Ryan’s Obamacare replacement bill than the truth, which is this bill is a betrayal of conservatives seven years in the making.

As the Heritage Foundation points out this slap in the face protects the Democrat base that got free or heavily subsidized coverage at the expense of the GOP base that earns the money to pay for Democrat’s discount insurance.

As I’ve pointed out to friends in the past the price of an Obamacare policy isn’t bad if you remember your premium is buying for two policies: One for your family and another for the moochers.

Ryan evidently believes Republican meddling in the health insurance market is such a big improvement over Democrat meddling that he’ll rule for decades. The truth is the base didn’t vote to swap incompetent meddlers we don’t know for incompetents we do know.

Our mistake was believing the lie that once Republicans controlled all three branches of government they would repeal Obamacare.

My doubts began when “repeal” was amended to “repeal and replace.” Why replace Obamacare’s socialized medicine with the Republican’s Obamacare Lite?

A simple return to the situation that existed before the passage of Obamacare could mean a reduction of up to 30 percent in the cost of insurance premiums and the return of the missing doctors. That alone should be enough win re–election.

The insurance market circa 2008 will cause problems in the dependency class that doesn’t like their handouts interrupted. But I have news for Ryan and his RINO gang — they don’t vote for you anyway. Your voters are the people this bill continues to burden.

Ryan and the rest of his brain trust would rather betray the voters who supported them than risk headlines from the Opposition Media about taking free insurance away.

First it does nothing to increase competition in the insurance market. Insurance companies still can’t sell nationwide, the “lines around states” Trump mentioned in the debate. This change alone would lower prices because companies would compete against each other. That’s why you can afford homeowner’s insurance and you can’t afford health insurance.

Second it does nothing to lower prices because the onerous and expensive coverage requirements for every policy are still included. If the consumer wants to buy a policy that covers him from Q-tip to transplant, fine he can pay for it. But if all he wants is major medical, he should be able to make that choice.

Finally it penalizes Republican states that didn’t expand Medicaid and rewards Democrat states that ran up a tab on Uncle Sam. The bill promises this will be phased out in the future, but we’re supposed to believe a Republican Congress that won’t boot 25–year–olds off daddy’s policy today will find the backbone to cut Medicaid tomorrow?

This debate isn’t really about health insurance and discussing it in those terms lets leftists set the parameters. This debate is about personal liberty. The liberty, as an adult, to make your own decisions regarding the future.

Government isn’t the national airbag saving the impudent and foolish from the consequences of their own stupidity. This only encourages more irresponsibility among the demographic whose only long–term commitment is a tattoo.

Healthcare isn’t a right. You don’t have the right to make someone go to medical school, graduate and then treat you for a price you think is reasonable, any more than you have a right to make the barber cut your hair.

I hope there are enough conservatives in the House to defeat Ryan’s disingenuous travesty. Because if they don’t it, means Obama won.

It’s obvious only difference between Nancy Pelosi as Speaker of the House and Paul Ryan is velocity. The train just moves slower and the conductor’s assurances are less believable under Ryan, but the final destination is still Greece.

Passage of this bill will raise a very pertinent question for conservatives: Why do you have a stronger belief in conservative principles and the power of the free market than the politicians who get your vote?

Why should we pretend anymore?

My suggestion next November is vote for the politician who promises to give away the most; at least he’s not a hypocrite. Maximize benefits now and hope the money doesn’t run out until after you’re dead.