A nationwide group of restaurants is now offering diners a chance to stick it to the man while simultaneously putting the fork to their tofu. Those of you who’ve wanted to join a great moral crusade, but never got around to cleaning up the basement and inviting a Syrian “refugee” to move in, can now eat locally and be served globally.

Restaurant Opportunities Centers United has launched a “Sanctuary Restaurant” movement for eatery owners who want to stay current with the latest moral–posturing on illegal immigration. 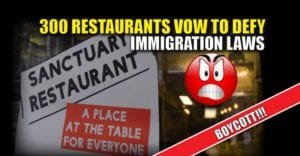 Now diners in New York, Minneapolis, Detroit, Boston, Oakland, California and Ann Arbor, MN may encounter a sign in their local bistro that reads, “Sanctuary Restaurant: A place at the table for everyone.”

I suppose if the establishment adheres to a dining policy that’s anything like Obama’s immigration policy, the sign means when an illegal sits down at your table for lunch, you’ll be picking up the tab.

This is why I like eating at Red Robin. Management doesn’t spend time trying to demonstrate its empathy and there’s an E–Verify sign on the front door that means everyone working in the restaurant is legally in the US.

That certainly isn’t the case even in non–“sanctuary restaurants.” A diner at a Virginia Chipotle would have a better chance of sharing a meal with Hillary Clinton than being served by a citizen.

According to WNYW, “Roughly 80 restaurants are participating” in this low–level criminal conspiracy to harbor lawbreakers and obstruct justice. The idea is to publically position management as social justice warriors, while privately protecting their profit margin by keeping their illegals working for wages citizens won’t accept.

At least 1.3 million illegals are working in the restaurant industry and the wage exploiters hiring them tell Washington they need a “robust pool of workers,” which really means a cheap pool of workers. Just like Georgia plantation owners, whoops, make that commercial farmers warn that fruit will rot in the fields if they can’t pay Juarez wages to Juan, restaurant owners predict food will sit uncooked and unserved if diners expect to be attended by citizens.

Naturally, that’s not how participants describe the conspiracy. Oh–so–compassionate backers want Trump to “alleviate the fear of deportation and other harassment” for illegals. The goal is to “protect” the illegals, but from what? Heartburn? E.coli? Paying for Trump’s wall? Their authority to write policy ends with the menu.

Instead they come off sounding like the prayer in Luke 18:11 where the Pharisee loudly proclaims: “God, I thank You that I am not like other people: swindlers, unjust, adulterers or deportation supporters.”

I wonder if dining–while–smug patrons have thought their choice though. Patronizing a business harboring criminals has a potential downside. Management may draw the line at breaking immigration law, but there’s no evidence the staff won’t be tempted to branch out. Once they’ve violated the border, what’s a little identity theft or trafficking in stolen credit card numbers?

And if management opposes sending the help back to their home countries, what’s the policy on sending a bad meal back to the kitchen?

One thing is different in “sanctuary restaurants.” Instead of giving patrons a signaling device that glows and vibrates when their table is ready, the staff carries the black box and the premises clear out if an ICE agent enters

“Sanctuary restaurants” give the staff “know your rights training” and webinars on how to demand the feds produce some paperwork before a raid. The conspirators are also supposed to adopt “anti–discrimination policies” that I suppose mean if a Trump supporter mistakenly wanders in and orders in English he has a 50–50 chance of being served.

The fact that an organization supporting millions of illegal aliens, who continue to defy the law, can describe enforcing immigration law as “harassment” and publically recruit other businesses to join the conspiracy, without any fear of legal repercussion, is a stark indication of how official support for the rule of law has collapsed in favor of the rule of feelings.

Illegal immigration may be the hope for the future of the Democrat party and the secret shame of RINO Republicans, but I can guarantee you his promise to enforce the law is one of the main reasons Trump won.

Aside from waiting for food that’s never served, the other bugaboo of the anti–deportation crowd is higher prices. They claim if xenophobes insist on forcing restaurants to hire citizens, then prices are going up, because those sorts of people won’t work for Karjackistan wages.

For me, that’s no deterrent at all. If the choice is between paying a buck more for a hamburger or doing away with “press one for English,” well, here’s your dollar.

Support Conservative Daily News with a small donation via Paypal or credit card that will go towards supporting the news and commentary you've come to appreciate.
Tags
deportation immigration