Another bedrock of conventional wisdom has been overturned. During the Trump administration it is okay to shoot the messenger. 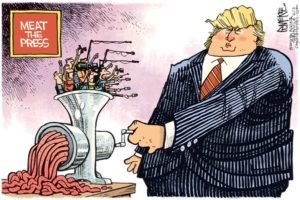 Trump finally held the news conference the media had been demanding and he gave it to them good and hard. Trump already holds the distinction of winning the greatest modern presidential debate — Round 2 with Hillary. Now news conference as president–elect set a record for entertainment and pugnacity that will be hard to top.

The big blowup came in connection with stories concerning slanderous sexual accusations that allegedly took place when Trump was in Moscow. Evidently Access Hollywood didn’t have this tape but the media hoped the FSB did.

It is an index of the contempt in which the media holds Trump that they could believe the charges were true. It takes an Anthony Weiner–sized intellect to think a man of Trump’s prominence could go to Moscow, hire hookers and not be videotaped by the Russian security service.

As much as it loved the story CNN didn’t have the tape, so the network did the next best thing and mentioned the existence of the slanderous charges and said US intelligence officials had a copy. This is sleazy signaling. Connecting the allegations with intelligence agencies gives a hint of veracity to viewers and fits nicely with the Putin–stole–the–election theme of the administration’s honeymoon period with the media.

Even worse, CNN’s mere mention gives other reporters cover when they use it. It’s the Pontius Pilate Gambit. CNN thinks it can’t be held responsible because they didn’t mention specifics.

The dean of CNN weasels, Wolf Blitzer, uses the technique frequently. I use a video in media training sessions where Blitzer quizzes former President Dick Cheney regarding the sexual preferences of one of his daughters. The question has nothing to do with any national issue, but MSM reporters love to discuss homosexuality with Republicans.

Cheney doesn’t dignify the question with an answer. He gives the furry Mustela a withering glare and says, “Wolf you’re out of line.”

Blitzer proceeds to wet his pants and whine “but people are saying.” Essentially the same excuse CNN is using now.

He told the CNN reporter, “No, I’m not going to give you a question…You’re fake news.” The New York Times moaned the scene “stunned” journalists and “delegitimized” reporters while the LA Times said Trump broke “the norms of presidential engagement with the news media.”

These so–called norms are rules unilaterally written by the news media. The mainstream media (MSM) is accustomed to Republican presidents who are quickly domesticated. Since they are interlopers in an office the media believes rightly belongs to the left, MSM culture informs Republicans it’s “not presidential” to object to the tone or content of coverage.

So Trump is supposed to grin–and–Bush it.

This might have worked in the past when the media sold the public on the fiction they were high priests of propriety and impartial purveyors of fact. Now the public can see and judge for themselves events that in the past might have been unavailable. Even more important, a multiplicity of news outlets has given the information consumer a variety of opinion instead of the cultural Marxist groupthink that dominated news coverage until the rise of Fox and the Internet.

Journos who followed the lead of the New York Times media columnist and threw what passes for their objectivity to the wind when covering Trump are now reaping the whirlwind.

Journalists are the ex–wives or ex–husbands of public discourse. Pretentious Pharisees who believe they are somehow exempt from societal norms.

The public simply doesn’t adore the media the way the media adores itself. That’s why they lose confrontations with Trump. He acts exactly the way 75 percent of the fly–over public would act when some self–important jerk starts badgering them.

The other 25 percent would deck them.

The media is so full of themselves they don’t even recognize an insult. After Trump dispensed with the CNN heckler, he went to the next reporter who was with BBC. Trump commented that network was a “beauty,” lumping them in with CNN, but the reporter thought it was praise.

If you haven’t watched the entire news conference you should do so. You’ll enjoy what Fox News host Sean Hannity described as “the single greatest beatdown of the alt-left, abusively biased mainstream media in the history of the country.”

Support Conservative Daily News with a small donation via Paypal or credit card that will go towards supporting the news and commentary you've come to appreciate.
Tags
CNN fakenews Politics The New York Times the Steele dossier