A commuter train jumped the tracks and crashed into the terminal at a New Jersey Transit stop killing 1 person and injuring 114 others.

Train number 1614 reportedly failed to slow down just prior to its regular stop in Hoboken, NJ, it then derailed, crashed through a wall and collapsed the ceiling at the terminal killing one and leaving 114 with injuries, some critical.

One of the most-critically injured people has been confirmed to be the train’s engineer, Thomas Gallagher. 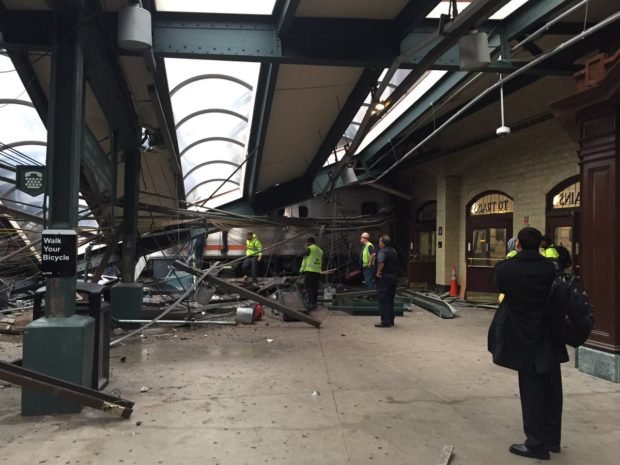 NJ Transit, PATH and Hudson-Bergen Light Rail service at the Hoboken Train Station has been suspended until further notice. Ferry service to New York City from the nearby terminal has also been shut down. Commuters should expect major delays to New York City.

What happened in the NJ Transit train crash in Hoboken: https://t.co/gRr9KU5aep pic.twitter.com/4JRTqdloap

One passenger said she knew something was wrong as the New Jersey Transit train neared the station and didn’t slow down.

Hoboken is located just across the Hudson River from Manhattan and is a major hub for commuters traveling into New York City.

New Jersey Transit said that the terminal is closed to traffic in both directions and that they have no estimate when it will re-open.

Rail service is suspended in &out of HOB due to a train accident at Hoboken station. (1/2)

National Transportation Safety Board officials are enroute to investigate the cause of the crash. The train had come from the Spring Valley station and was crowded — especially in the first and second cars.

Officials don’t have reason to suspect terrorism, but the investigation is in its very earliest stages.

Gov. Christie: No indication #NJTransit train crash in #Hoboken was anything other than an accident. Not jumping to conclusions.

New York Governor Andrew Cuomo and New Jersey Governor Chris Christie held a joint press conference  Thursday afternoon in which they confirmed a single death and 108 injuries from the crash. Christie said that NJ Transit train service to Hoboken would be impacted for an unknown period of time, but that PATH train service would resume this afternoon and  continue through rush hour.

Social media is abuzz with reports from the scene:

Support Conservative Daily News with a small donation via Paypal or credit card that will go towards supporting the news and commentary you've come to appreciate.
Tags
Hoboken New Jersey train wreck