The Shannon family’s latest unexpected encounter with federal immigration policy couldn’t have come at a more inconvenient time. Here it is almost tax day and my daughter is hit with an unexpected HOLA! bill. That’s HOLA as in Hidden Outlay for Left’s Amnesty.

My daughter is driving along in Dallas and as she proceeds through an intersection, her car is T–boned by a red–light–running illegal alien who’s here to cause the car crashes Americans don’t want to cause.

Jessica instantly finds herself wrapped in a soft cushion of government mandates and protection as every airbag on the driver’s side explodes. Once the balloons deflate, she calls 9–1–1. 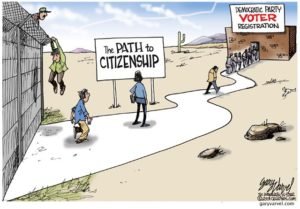 Dallas is a Sanctuary City and investigating citizen Vs. illegal car crashes is no problemo. Since the INS won’t be involved this time the automovilista doesn’t choose to flee the scene. No driver’s license or other form of legal identification means the officer takes down whatever alias the illegal is using that day and issues Jose two tickets. (Que lastima! More government paperwork!) Those are tickets that will never be paid, but that’s not the officer’s concern.

No need for the tedious exchange of insurance information and arguments over penmanship because the Mexican export not only has an aversion to government documentation, he also eschews insurance company certificates. Leaving the officer free to answer the next call.

The paying begins as Jessica experiences first hand the hidden cost of undermining the rule of law. Here is a brief rundown of some of the expenses imposed on a citizen, first–year school teacher by the Democrat’s plan to change the electorate and the RINO conspiracy to import Central America’s wages.

First, Jessica’s car is totaled. If she’d won the locomotion lottery and been hit by a citizen, their insurance would have paid her deductible. But in a no papers, no policy situation she’s out the entire amount. Next she’ll be spending hours negotiating a deal on a new car. The longer that takes, the more she pays for the rental car she driving in the interim.

Once she makes the deal, it’s time to pay sales and property taxes on her new ride. Taxes Jessica assumed were years away, with a car less than three years old, until she had a personal encounter with Obama’s border policy.

Long term, the accident will be costing her every month in the form of higher insurance rates for a crash she didn’t cause.

This isn’t our family’s first head–on with illegals on wheels. A drunk Mexican illegal killed my dear friend and cycling coach, while she was on her bicycle training a client. After we moved to Virginia another acquaintance from our gym was — you guessed it — killed by a drunk–driving illegal. And a little over a year ago I was rear ended by an anchor baby with no insurance.

My car survived and my daughter did, too, so I’m counting my blessings.

Increased transportation costs aren’t the only HOLA charges. At a nearby elementary school there’s no money for a math specialist, but there are four English as a second language teachers with a fifth on the way.

All this is invisible to Washington and ignored by ethnic enablers already in office because they simply could care less. Citizens who play by the rules are bearing the brunt of the elites’ open border policy.

John “The Apostle” Kasich tells us you can’t deport illegals because “it would break up families.” Marco Amnesty claims “law abiding” illegals will have a chance for permanent residency.

What none of the amnesty supporters tell you is Jessica’s collision buddy qualifies for amnesty under that framework. The two traffic tickets he won’t pay are driving infractions and not criminal violations. As far as Obama and the RINOs are concerned he has the same claim on citizenship as Jessica does.

I’m tired of all the hand–wringing over illegal’s families. How about some outrage over the damage this slow–motion erosion of our American culture is doing? Illegals choose to come here and they can bear the consequences. Citizens certainly have.

As far as I’m concerned if Uncle Sam put a man on the moon, he can return a Mexican to Mexico.

Support Conservative Daily News with a small donation via Paypal or credit card that will go towards supporting the news and commentary you've come to appreciate.
Tags
amnesty Illegal Aliens Illegal immigration