Former Presidential hopeful Mitt Romney believes he has found the way to knock Trump out of contention for the nomination – disqualification based on a rule no one can find … anywhere.

Romney posted this magically-appearing rule on Facebook Wednesday afternoon along with a rant about why Trump should fall in-line with his rule.

“It is disqualifying for a modern-day presidential nominee to refuse to release tax returns to the voters, especially one who has not been subject to public scrutiny in either military or public service” wrote Romney.

The Constitution only requires the candidate to be 35 years of age and a natural-born citizen. We have been unable to find anything in the RNC rules that require the release of tax returns in order to seek the nomination.

Trump told the Associated Press that he would not be releasing his tax returns before an IRS audit completed as this was the advice of his lawyers.

Mitt is getting an earful on social media after pushing this ham-handed idea: 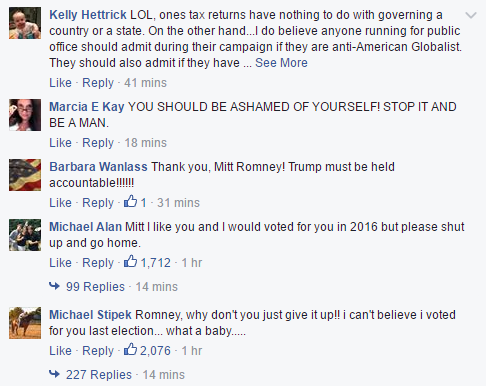 There are only three possible outcomes from this ill-conceived diatribe:

In none of those scenarios does the Republican party have anything to gain by marching Mitt out to post this craptastic message. Then again, the GOP had nothing to lose – if the message got as negative a response as it seems to be getting, it’s all on Mitt.

Support Conservative Daily News with a small donation via Paypal or credit card that will go towards supporting the news and commentary you've come to appreciate.
Tags
2016 Election News Mitt Romney tax returns