In early October, my alma mater made headlines after it decided to fire chemistry professor Dr. Maitland Jones Jr. after 82 of his students signed a petition noting that his organic chemistry class was “too hard.” The students accused Jones of purposely making the class difficult, citing that their low scores negatively impacted their “well-being,” and their chances of getting into medical school. Instead of evaluating the rigor and substance of Jones’ curriculum, NYU justified its hasty action by noting the class’s unfavorable student reviews. This type of judgment would never pass in the fields of architecture, aerial engineering, or even the food service industry; why is it permissible here?

In response to the disciplinary action, former medical humanities professor and bioethicist Dr. Alice Dreger blasted the move in a tweet, saying it “made her skin crawl.”

“We aren’t going to end up with good doctors by letting undergrad pre-meds pass organic chem because universities want to protect their US News rankings,” she wrote.

This article made my skin crawl. We aren't going to end up with good doctors by letting undergrad pre-meds pass organic chem because universities want to protect their US News rankings. Gah! https://t.co/ruPFtOQJVd

The reaction is justified considering how standards for pre-med programs and even medical schools have shifted in the direction of equity and social justice. It seems that even professors cannot hold the line on academic performance, when the institutions they teach at make it a secondary importance to accommodating students’ sensitivities on the basis of how faulted or victimized they feel while learning in the highly competitive and demanding field of medicine.

A Pressing Concern for Medicine

The rise in efforts to increase diversity in medical schools can be seen as coming from a place of good intentions: to create an academic environment which promotes minority doctors, especially those who come from underserved communities. Having a diversification of medical practitioners is beneficial, especially if said doctors use their skills and talents to give back to communities that drastically need medical attention, such as inner cities and remote rural communities.

Advocates for broader outreach cite studies such as the AAMC’s report titled, “Altering the Course: Black Males in Medicine” which notes how the number of black male applicants dropped from 1,410 in 1978 to 1,337 in 2014. They could also point to a Yale-led study that found minority students are less likely to get placed in residency programs than their white and Asian colleagues.

These seem to be pressing issues which must be addressed if medical schools wish to increase black and brown students’ success rates. However, instead of working towards expanding tutoring, learning programs, and outreach initiatives, it seems as if universities and medical schools want to focus strictly on the intersectional aspects of this research.

The Rise of Intersectionality in Medicine

“In previous studies, we’ve really only looked at one dimension of identity, but there’s intersectionality and the compounding of multiple marginalized identities…we wanted to see how these identities came into play in the application process…there is a clear compounding effect of being a student underrepresented in medicine and lower income…there is a double whammy in terms of how medicine is classist and racialized.”

Nguyen states that it is unclear what is contributing to lower placement rates among marginalized students, and yet failed to consider how a plethora of other factors, such as lack of mentors in medicine, limited financial resources, and differing cultural perceptions of working in medicine, may contribute to this phenomenon. Looking back at AAMC’s report, it is important to note that while the number of black male applicants did decrease over the decades, the report also shows how the overall number of black medical students actually rose from 933 in 1978 to 1,227 in 2014—a 32 percent spike.

This is a welcoming statistic which can be improved if schools provide marginalized communities with greater access to high school and pre-med opportunities.

Unfortunately, institutions like NYU have taken it upon themselves to lower the bar of admission through intersectional incentives, rather than enforcing academic standards—which we all agree are needed in order to have dependable and safe future doctors.

A Religion of Grievances

The shift in a medicine-based education to an emphasis on race and social concern was highlighted by former University of Pennsylvania Medical School Dean Stanley Goldfarb, who stated:

“…Today a master’s degree in education is often what it takes to qualify for key administrative roles on medical-school faculties. The zeitgeist of sociology and social work have become the driving force in medical education. The goal of today’s educators is to produce legions of primary care physicians who engage in what is termed ‘population health.’”

Medical schools’ administrations seem to have become taken over by sociologists and critical race theorists—if not in title, then certainly in practice.

Most recently in the news, the University of Minnesota Medical School conducted a white coat ceremony for its Class of 2026, where each student had to recite a modified Hippocratic Oath which—on top of pledging to do no harm and to help the sick whenever possible—would “honor all Indigenous ways of healing that have been historically marginalized by Western medicine…white supremacy, colonialism, and the gender binary.”

The politicization of medicine has greater effects than just this sort of political white-knighting. Instead of focusing on promoting preventative care and treatment based on actual medical effectiveness, the impetus behind these medical schools’ actions seems to be entirely race-based. For example, Georgetown University is funding the study and formation of courses to prevent ‘microaggressions’ in medicine.

Likewise, the Association of American Medical Colleges released a new standard for teaching medicine which requires students to achieve ‘competencies’ in ‘white privilege’ or risk failing. It also seeks to do away with the ideas of gender and race, the latter of which the AAMC describes as “… a social construct that is a cause of health and health care inequities, not a risk factor for disease.” If this is the case, then how will doctors address the pervasiveness of Sickle-Cell Anemia and Multiple Myeloma in African-American communities, the prevalence of diabetes in Asian groups, or the largely unknown effects of hormonal therapies in minors?

This dramatic shift from upholding course standards to molding medicine in a racial lens is concerning. Though proponents of such measures would argue this is critical to improving race-relations in medicine and to deconstructing students’ “implicit biases,” saving lives and providing exceptional preventative care supersedes that.

A 2016 BMJ analysis found that medical errors in health-care facilities are actually incredibly common and may even be the third-leading cause of death in the US. Medical malpractice accounts for about 251,000 deaths every year—this is more than accidents, stroke, Alzheimer’s, and respiratory disease: 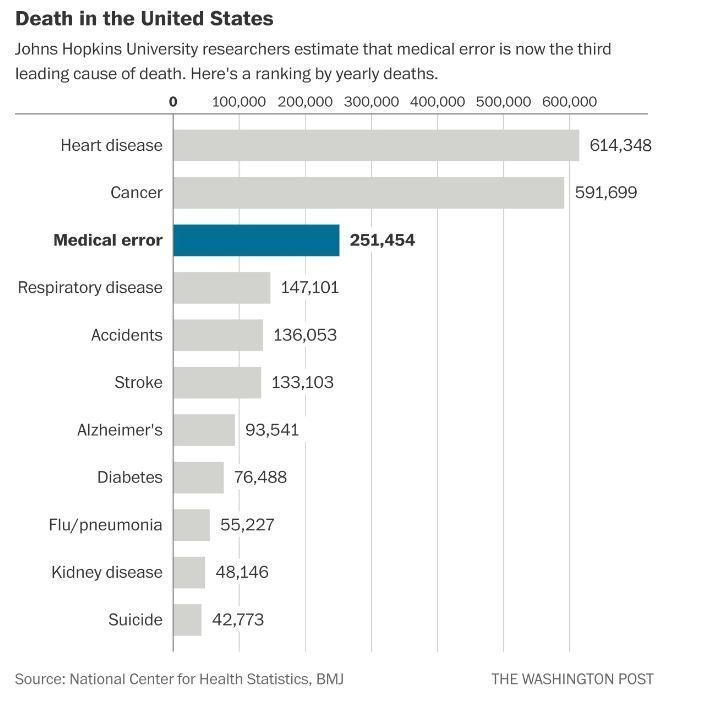 A doctor’s most important duty to his or her patient is to do no harm—this includes preventing negligence, refraining from superfluous procedures, and ensuring every avenue of care is addressed prior to conducting invasive surgery. From shoddy hospital conditions to inexperienced nurses to just bad doctors, healthcare resulting in patient harm is a much more pressing issue than the alleged microaggressions resident doctors give off during their rotations.

The race and gender of a practicing physician should not matter as long as they are skilled, capable, and reasonable in their practice. It is therefore the universities and medical schools’ responsibility to uphold the rigorous standards they once had in order to ensure their students are prepared to work in high-stress, highly complicated medical scenarios—above all else. We need capable and skilled doctors, period.

Support Conservative Daily News with a small donation via Paypal or credit card that will go towards supporting the news and commentary you've come to appreciate.
Connor VasileNovember 6, 2022
2
Facebook Twitter Reddit Telegram Share via Email Print