What exactly the Convention of the States?  In light of our current political situation, with big government growing even bigger, combined with the presiding president weaponizing departments within his jurisdiction, there should be no question that we need to pull the chord on the deep state and restore our Constitution.

Some of the issues related to and not being addressed by the current president and his administration include but are not limited to: CRT in all aspects of our country including our military, education -the overreach of the teachers union, destruction and rewriting history, outright lying, the open southern border thereby allowing into our country terrorists, criminals, pedophiles, drug cartels with dangerous  Fentanyl imported by China, inflation, government spending, dismantling our Constitution, taxation, weaponizing the government and so on. So what can we, the American people, can do to stop it? 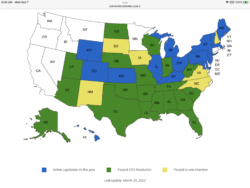 The whole purpose behind Article V is to stop Government overreach. It was put in place by the founding for fathers to address the situation we are currently experiencing in a peaceful manner.

There is an application for each state to apply for a Convention of the States under Article V. Application model:  https://conventionofstates.com/files/model-convention-of-states-application/download

Mark Meckler is the President of the Convention of States Foundation & Convention of States Action (COSA) which has over 5 million supporters and activists, representing every state legislative district in the nation. Mark has a law degree from the University of the Pacific, McGeorge School of Law.

The mission of COSA is “to restore a culture of self-governance in America and to curtail federal overreach. COSA’s primary focus in accomplishing this mission is using a limited Article V Convention to propose constitutional amendments which would place limits on the power and jurisdiction of the federal government, impose fiscal restraints and place term limits on federal officials.”

Government control has been festering for decades. Sadly, Covid expedited the situation as a means to control the masses.   Although the deep state has escalated and accelerated its agenda, make no mistake, they are detrimental to our Republic and everything the majority of Americans stand for.

Alliances currently exist between the far left and the media, teachers’ unions, corporations, social media, and so on. Every aspect of your life is currently being trampled upon by people who believe they know what is best for you and your family. They do not believe in freedom, they are indoctrinating your children, they don’t believe in nor do they want any Christian values anywhere in the world. The Deep State, the Great Reset, and the far left participants are working overtime to prevent any digression of their goals worldwide, however, the Convention cannot be reached by their tentacles here in the United States.

Beware, as more and more Americans become aware of the Convention it also becomes more of a threat to the left; they will use any means necessary to downplay it or discredit its use. The Convention of the States is something that the federal government has no control over and they don’t want you, the American people, to be in favor of it. It is a peaceful way to put an end to some of their far-left agendas that they are currently implementing under the disguise of tolerance, green energy, abortion, Ukraine, and so on.

For more information on the Convention of States or to get involved in your state go to: https://conventionofstates.com

Support Conservative Daily News with a small donation via Paypal or credit card that will go towards supporting the news and commentary you've come to appreciate.
Tags
Article V Deep State far-Left The Convention of the States