Adolph Hitler used to say that if you tell a lie big enough and keep repeating it, people will eventually come to believe it. Napoleon Bonaparte said that history is a set of agreed upon lies. Paraphrasing Napoleon, “History is a collection of fake news published by the mainstream media,  promoted by  Big Tech and enabled by the FBI and Deep State”

You may remember mainstream media coverage of the following events

We have known for decades that journalists leaned left. America First policies so triggered them, they abdicated the 4th estate and came out of the closet behaving more like the DNC’s Propagandezepete, while Big Tech promised to democratize the worlds, it now is in the business of Silo building. Twitter for example, encourages a hit-and-run approach as a form of personal safety: Making social media argumentation is antithetical to reasoning 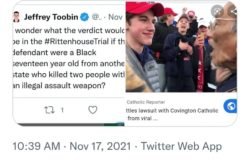 How can we forget Big Tech’s suppression of the Hunter Biden story leading up to the 2016 elections. Main stream media characterized it as “lawful” – just like it was lawful to kill Jews or to own slaves.

Now consider that more lies have been aimed at destroying the Roman Catholic Church than any other institution in the world. So much that even most Catholics believe the lies they were taught in high school or have seen on T.V. and social media:  Consider all the misrepresentations that Pope Francis has been subjected to, even when he clearly stated in his Laudato Si:  “Since everything is interrelated, concern for the protection of nature, is incompatible with the justification of abortion” – Pope Francis

In his book Forty Anti-Catholic Lies: A Myth-Busting Apologist Sets the Record Straight, Gerard Verschuuren refutes popular myths about Catholicism, while in  “Seven Lies about Catholic History,” Dr. Diane  Moczar debunks revisionist history exposing  the lies we have heard over and over again

After all, China does not view the USA or Russia as her biggest threat but Christianity in general & Pope Francis in particular.   Simple math:  There are over 2.6 billion Christians in the world but only 1,4 billion Chinese

Earlier this month, Xi told a conference in Beijing, described in official reports as the National Work Meeting on Religious Affairs, that all religions in China needed to embrace the Communist Party, expanding on one of his long-held policies.

We saw this phenomenon with the Wuhan Virus. Observations shortly after the release of the virus, our observations continue to hold: research that threatens the status quo, like Hydrochloroquine is vilified, censored  & unlikely to be published. This applies to just about any scientific endeavor.

The Establishment, including Wikipedia,  is still promoting the Big Lie that that Biden was elected in a clean election & that the January 6th disruption was organized by President Trump – Refer to Wikipedia’s
Trump’s false claim of a stolen election, completely disregarding the facts, such as

https://www.youtube.com/embed/RKmxL8VYy0M
We know for example, that some 60-90% of security breaches happen due to Inside Jobs. Insiders with motive, have a MOM: Motive, Opportunity and Means – enough to easily commit any crime, such as voter fraud. In fact, with insider help, voter fraud is so easy, a caveman can do it.

Liberals were willing to betray group loyalty, disrespect authority or do something disgusting, like say, voter fraud while conservatives said they were less willing to compromise on any of the moral categories.

Again I ask, why is it the Main Stream Media, DNC categorically deny that the 2016 elections included some level of voter fraud?

Because if you repeat a lie often enough, it becomes history!