The third-ranking Senate Republican, John Barrasso of Wyoming, called on President Joe Biden to withdraw his nominee to lead the Bureau of Land Management for intentionally deceiving his committee about her involvement in an “eco-terrorism” case in her early 20s.

The nominee, Tracy Stone-Manning, told the Senate Energy & Natural Resources Committee in writing in May that she had never been the target of a federal criminal investigation, but that she testified before a federal grand jury in 1989 and during a criminal trial in 1993 that ultimately led to the conviction of an individual had sabotaged a local forest with tree spikes.

But numerous news reports, accounts of federal law enforcement officials and statements from Stone-Manning herself at the time of the incident and subsequent criminal trial strongly suggest that she was a target of the federal government’s investigation into the matter.

The Montana Kaimin reported in October 1989 that Stone-Manning was among the seven individuals who were served with subpoenas and forced to provide fingerprints, palm prints, handwriting samples and hair samples to a federal grand jury investigating the matter.

A Forest Service law enforcement official confirmed to the Kaimin at the time that the subpoenas were issued as a result of an investigation into the tree spiking incident.

“It was degrading. It changed my awareness of the power of the government,” Stone-Manning said. “Yes, this was happening to me and not someone in Panama. And, yes, the government does do bad things sometimes.”

Stone-Manning also told a local news outlet in 1993 that she could have been charged with conspiracy in the matter had she not cooperated with federal prosecutors.

“It’s clear that Ms. Stone-Manning was intentionally trying to deceive the Senate Committee on Energy and Natural Resources,” Barrasso, the ranking member of the committee, told the Daily Caller News Foundation. “She told the committee she had never been the subject of an investigation and yet complained about being investigated in the press. President Biden should withdraw her nomination.” 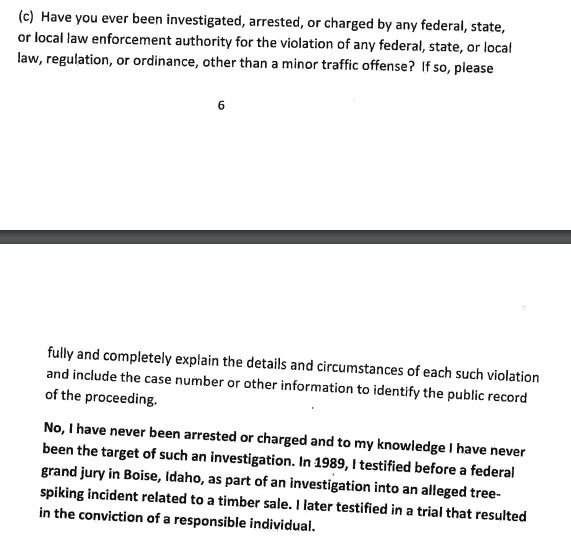 Stone-Manning received legal immunity from prosecution in 1993 to testify against the key suspect in the case, who she identified in court as her former roommate and member of her circle of friends, records show. She said John P. Blount asked her to send an anonymous and threatening letter to the Forest Service in 1989 warning that a local forest in Idaho set to be logged had been sabotaged with tree spikes.

“P.S. You bastards go in there anyway and a lot of people could get hurt,” the letter stated.

Before Stone-Manning sent the letter, she testified that she retyped it from a rented typewriter because she “didn’t want it on my personal computer.” She also began to explain “because my fingerprints,” before a defense attorney cut her off.

Stone-Manning told the Missoulian in June 1993 that she retyped the letter “because my fingerprints were all over the original and I was scared.”

“What I really feel, though, is that I reported a crime, although anonymously,” she said.

Stone-Manning told local media outlets at the time of the trial she waited until 1993 to inform federal authorities of her role in sending the letter because she was scared Blount would threaten her life. She also said she has always denounced tree spiking.

Tree spiking, which The Washington Post and other news outlets have described as an “eco-terrorism” tactic, is a form of sabotage in which metal spikes are nailed into trees to make them unsafe to log. If gone unnoticed, tree spikes can cause serious injuries for workers, such as when a 23-year-old mill worker in California had his jaw cut in half in 1987 when his saw exploded upon striking an unnoticed tree spike. 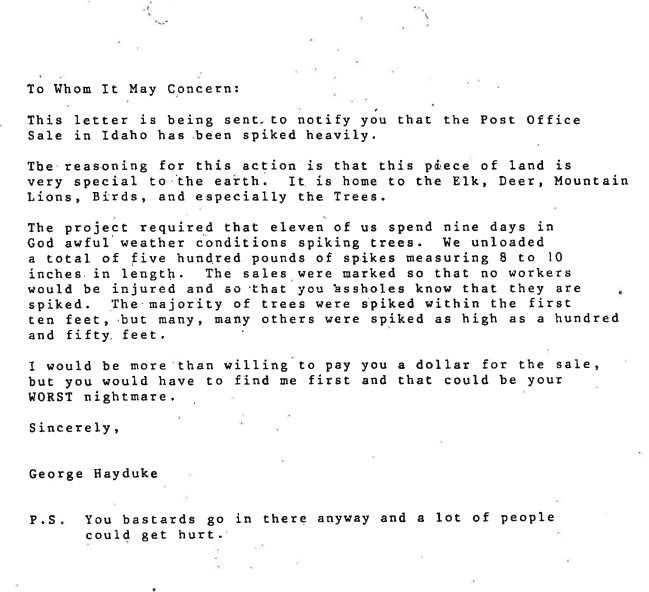 The anonymous letter Tracy Stone-Manning told a federal court she sent to the Forest Service in 1989 on behalf of John Blount. (Screenshot)

Stone-Manning has provided differing accounts of her involvement in the case in the decades following the incident.

She told the Missoulian in May 1993 she felt safe enough to inform federal authorities that she mailed the threatening letter to the Forest Service on Blount’s behalf upon reading a newspaper account of Blount’s arrest in February that year.

“Once he was in jail, I was safe,” she told the Missoulian. “It was time to come forward. It was my responsibility.”

But Stone-Manning offered a different version of events in 2013 after then-Montana Gov. Steve Bullock nominated her to serve as the director of the state’s Department of Environmental Quality.

Stone-Manning told the Missoulian in 2013 that she was contacted unsolicited by Blount’s ex-girlfriend in 1993, who told her Blount was soon to be released from jail due to an unrelated domestic abuse matter. Stone-Manning said the ex-girlfriend told her that Blount would remain imprisoned if Stone-Manning testified about his involvement in the tree spiking incident.

“She knew everything about the tree-spiking story and she knew if she told everything that could keep him in jail,” Stone-Manning said in 2013, according to the Missoulian. “She asked if I would testify, and I said yes, and he went to jail.”

When questioned by Montana lawmakers in 2013 about her involvement in the case, Stone-Manning described Blount as a “rather disturbed person.” She did not inform the lawmakers that she had identified Blount as a member of her circle of friends during her 1993 court testimony.

Neither version of events presented by Stone-Manning align completely with the timeline presented in Breitsmater’s pre-trial memo.

Breitsmater wrote that federal authorities were first informed that Stone-Manning sent the threatening letter after being contacted by Blount’s ex-girlfriend in December 1992.

A Biden administration official told the Associated Press on Friday that the administration was fully informed of Stone-Manning’s 1993 testimony in the tree spiking case prior to her nomination.

Stone-Manning “has always been honest and transparent about this matter, which has been covered by the media for decades,” the unidentified administration official said.

The White House and Bureau of Land Management did not immediately return a request for comment.

Support Conservative Daily News with a small donation via Paypal or credit card that will go towards supporting the news and commentary you've come to appreciate.
Andrew KerrJune 17, 2021
Facebook Twitter Reddit Telegram Share via Email Print