Leave it to the Democrats and mainstream media to focus the nation’s attention on a non-issue while America is at risk of being taken over by a globalist cabal. How long will it take before the Pope is calling the shots in the United States of America? Not long if President Donald Trump has his way.

Whether Trump or presidential candidate Joe Biden win in No 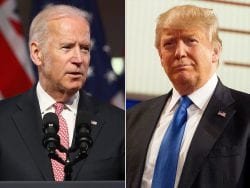 vember, Rome could be calling the shots in Washington.

Roman Catholics account for about 22% of the U.S. population, yet they are on track to hold six of the Supreme Court seats once Amy Coney Barrett fills the vacancy. Trump’s last appointee, Brett Kavanaugh, is a papist. The president’s first selection, like Neil Gorsuch, were raised Catholic.

Gorsuch is thought to be a protestant. The other two seats are filled by Jews Stephen Breyer and Elena Kagan.

America had 314 million people in 2014, according to the Census Bureau. Some 205 million identified as Christian. The Pew Forum in 2019 reported of those claiming a Christian faith 43% were Protestant, 20% Catholic and 3% were “other Christian.” The same article said 17% of Americans claimed no religious affiliation and 2% identified as Jews.

Trump may be courting evangelical voters, even claiming to be “born again” when it suits him; he is giving the country to the papists. Forget the Chinese and Russians. It is as if Trump is attempting to buy his way into heaven.

Everyone knows all Catholics are beholden to the pope. History is full of examples.

The first Catholic to become a presidential nominee was Al Smith, the governor of New York, in the 1928 election. Smith, like JFK some 40 years later, approved of sinful appetites.

Sen. John Heflin (D-Ala.) warned the Senate, “The Roman Catholics of every country on the earth are backing [Smith’s] campaign” that year.

Further, Heflin warned Northern media elites “are sending writers down there from New York and other places to misrepresent and slander our State, all this to build a foundation on which to work for Al Smith for President. The Roman Catholic edict has gone forth in secret articles, ‘Al Smith is to be made President.’”

Then there’s the case of JFK.

By the 1950s, protestants and evangelicals knew all about the dual loyalties to both the Vatican and the United States.

Underground pressure from white religious leaders and southern newspapers gave Jack Kennedy the opportunity to deliver a televised message to Southern Baptist leaders in Texas during his 1960 presidential campaign.

“I am the Democratic Party’s candidate for president, who happens also to be a Catholic,” he said. “I do not speak for my church on public matters, and the church does not speak for me.” That may have won him the race.

Sure some papists support issues like favoring abortion, sex outside of marriage, homosexuality and a female priests, in spite of church prohibitions. Biden and too many of his supporters to list here are in this group.

Suppose that seeming liberality is just a ruse for good Americans to let their guard down and open the door for the pope to take over?

What do we see on TV news? There’s nothing on the Papal Conspiracy. Instead its Trump’s alleged taxes. If Trump doesn’t legally pay taxes, that’s not on him, it is on the career politicians like Biden, Mitch McConnell, Dianne Feinstein, Eddie Bernice Johnson, Alcee Hastings, Grace Napolitano, Don Young, Nancy Pelosi, Steny Hoyer, James Clyburn and their ilk who have written the laws to protect the wealth of a small minority of Americans. A minority, which by the way, includes those listed above. They write/wrote the tax laws that appear they to have used legally to avoid paying taxes.