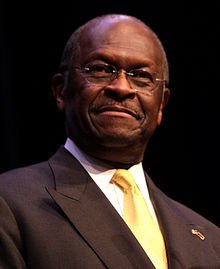 I always liked Herman Cain. He was the quintessential example of the American Dream. He was born into abject poverty. His mother was a house keeper and father worked three jobs to help raise the family. Throughout his career Herman showed that by hard work and perseverance you could become a success and that he did. He took a fledgling company like Godfather’s Pizza and turned it into a whirling success, he even ran as a presidential candidate in 2012 so his death at 76 from the Covid virus came as a shock to many.

Cain, fed up with the way the U.S. was headed, decided to run for President in 2012. He went from a dark horse candidate to becoming a top tier candidate and even at one point the front runner. Voters flocked to Cain for his charm, willingness to say what was on his mind, and well-marketed 9-9-9 economic plan. Nine percent income tax, nine percent federal tax and nine percent corporate tax. Herman Cain lived a full life until the very end. He was unafraid. Now he is at peace in heaven.

Herman wasn’t even cold yet and the destroy Trump media wasted no time in blaming Trump for his death trying to tie Cain’s death to Donald Trump due to Cain attending his Tulsa rally. They ignore the fact that Cain traveled extensively. In fact on his Facebook page Cain says he traveled extensively in the last few weeks and there is no telling where he got it from.

Herman also had underlying conditions that could have contributed to his death. In 2006, Cain was diagnosed with Stage IV colon cancer and metastases to his liver and given a 30 percent chance of survival. Cain underwent surgery and chemotherapy following the diagnosis, and the cancer was subsequently reported to be in remission .

Cain’s staff on July 2 said there was “no way of knowing for sure how or where” he contracted the disease.[114] Dan Calabrese, the editor of Cain’s website, said, “I realize people will speculate about the Tulsa rally, but Herman did a lot of traveling [that] week, including to Arizona where cases [were] spiking.”[44]

On June 29, 2020, Cain was diagnosed with COVID-19 and admitted to an Atlanta-area hospital two days later.[114] After four weeks of hospitalization, he died from the disease’s complications at age 74.

CNN’s Chris Cuomo stated “[The coronavirus] just took a former presidential candidate, Herman Cain. Yes, he supported the president. The president says he was a good friend of his. We wish his family well, and we wish that he rest in peace. And I wish that this president have no peace until he thinks about what he’s exposing people to,” Cuomo said.

“He didn’t even mention that Mr. Cain was at his rally among the maskless masses right before he was diagnosed. Now, maybe he didn’t get it there. Sure as hell didn’t help. May Herman Cain rest in peace. He fell ill not long after that rally in June. The one in Tulsa, Oklahoma. You see him not wearing a mask. How many lives do we have to lose? How many have to be sick?” he asked.

Hey Chris if we’re going to go down that path how about saying something about the thousands of seniors who were killed because of your brother placing COVID victims in nursing instead of in the Javits Center with 3000 beds that Trump had set up for that purpose or any of the two hospital ships with a thousand beds each just waiting to take them, but no he had to put them in nursing homes and thousands died. God forbid he should cooperate with anything Trump does. So don’t go blaming Trump for Cain’s death. Look in your own back yard first. Your brother is a real mass murderer  and you broke your quarantine when you were supposed to be on it so don’t go blaming Trump. Your brother lied and thousands needlessly died. I wish that you and your brother have no peace with that on your heads. Ever hear the expression people who live in glass houses shouldn’t throw stones?

I guess if the dog bites or the bee stings or your stub your toe it must be Trump’s fault to these people.

Support Conservative Daily News with a small donation via Paypal or credit card that will go towards supporting the news and commentary you've come to appreciate.
Tags
Herman Cain