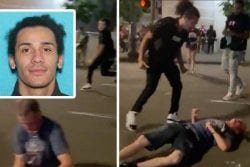 Police in Portland identified the man responsible for the brutal Attack of a truck drive Sunday night.

The police are looking for Marquise Love, 25, whose alias name also includes “Keese Love.” for the vicious assault that was caught on video and then streamed on social media.

The police said the events started around Southeast 4th Avenue & SW Taylor St. The victim was helping a woman who was the vicim of assault and robbery. Another woman got out of the truck and was attacked from behind and dragged to the ground.

Around 10:30 p.m. police responded to the call. Witnesses stated that people chased the white Ford truck which then crashed. The video confirms the man getting out of his truck being pushed to the ground, hit, kicked and then Marquise Love jumps in with a round house kick to the head which knocked the victim unconscious. A video of the entire incident which includes BLM can be seen at Drew Hernandez: @live matters show.

Chief Lovell of the Portland police said,  “The Portland Police Bureau is taking this assault and other incidents of violence extremely seriously. Our Detectives continue to investigate this assault as well as other acts of violence directed toward protesters, but we need more than just videos from social media. In order to hold individuals responsible for criminal acts, we need the public to provide information and refrain from tampering with evidence.”

Anyone with information about the incident is asked to call Detective Brent Christensen at 503-823-2087 or at [email protected].

Support Conservative Daily News with a small donation via Paypal or credit card that will go towards supporting the news and commentary you've come to appreciate.
Tags
featured Marquise Love Portland The BLM