Noone told you when to run. You missed the starting gun—Pink Floyd, Dark Side of the Moon

The invisible enemy known as the coronavirus is not the only enemy we are up against. China and radical Islam are at war with us and they are winning. And, we are letting them win through our trade policies and immigration laws.

Just look at the John Hopkins heat map and it seems that the United States and the UK including France, Spain, and Italy are the hardest hit with the COVID-19 virus. Now if you look at Asia it is limited to the eastern part of China. 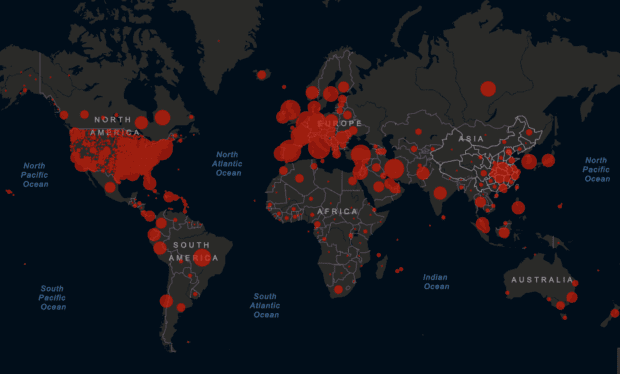 Yes, other parts of the world are infected, 182 countries in all,  but to a very low area density. Now if you were China and wanted to change the balance of world order, it would be logical that the key areas to hit would be the United States and the UK including France, Spain, and Italy (The free world). Democrats stated early on that we were wrong for stopping travel to/from china, closing our borders. They yell when Trump takes action and called him racist and xenophobic even though he saved millions of lives by doing that. Could they be on the side of China with the goal of a one-world order? Trump called this a war, is he wrong? It would seem to the perfect storm if China wanted to take control. Here is a couple of events that took place that was caught, Who is to say what got past us.

Zaosong Zheng, a graduate student at Beth Israel Deaconess Medical Center in Boston, was arrested on December 10 as he was attempting to fly from Boston to Beijing with 21 vials stolen biological specimens.

Jan 2020 WASHINGTON: Earlier this month, Yuhao Wang and Jielun Zhang, Chinese students at the University of Michigan, drove past a gate guard at Naval Air Station Key West after ignoring instructions to turn around, leading military police on a 30-minute chase that ended in their capture where investigators found pictures of military buildings and ships on a camera and cell phone.

Yanqing Ye, 29, a Chinese national, was charged in an indictment with one count each of visa fraud, making false statements, acting as an agent of a foreign government and conspiracy. Ye is currently in China.

My question is, are we at war with just a virus or the country from which the monster came?

Whatever the answer is, you have no choice but to go after the country who started this mess.  If nothing else, their lack of transparency and failure to act were just their weapons of choice and they are trying to cover that up.

You also are fighting for your life if infected by the virus.  So you have to fight both, first heal if you can, from disease, then go after the country who seems to want you dead.  Coronavirus started in China,  accidentally or deliberately released, makes no difference, both kill, and thus is a CHINESE VIRUS, no matter how much they deny it or accuse the US. In short, you have NO CHOICE but to battle BOTH, the virus and China.

But Trump was the first to recognize that, and immediately stopped travel from China.  He saved millions of American lives just in this one early act.  Democrats will never acknowledge that nor give him credit.  He was Brilliant!  Now, Dems are saying that was the right thing to do only he should have done it sooner. They want it both ways. They were too immersed in their phony impeachment to even notice anything and now they blame him?

This is all part of their plan for the last four years to get rid of Trump because they still can’t believe they lost. And thank God they did. Trump is all for the people and wants people to succeed and for us to be number one again. The do-nothing Dems are all for power over the people which can plainly be seen in the actions of Pelosi and Schumer. 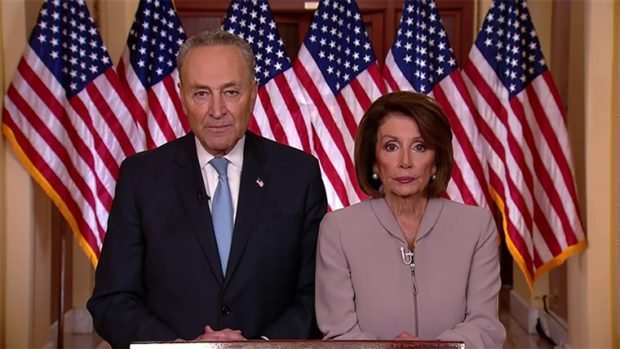 The two biggest threats in the world today are communism and radical Islam as the goals of both are world domination. China and Muslims are slowly taking us over through immigration, land and real estate purchases which they pay for in cash in suitcases so there is no paper trail.  One thing for sure is that the Chinese have invested a lot of money in land and other real estate as well as businesses here in the USA as well as in other countries.   They are all over Italy!

Those assets can be frozen and they are huge. They bought up just about every business which produces pork products along with pig farms.

Smithfield Farms, the largest pork producing farm in the USA was sold recently to China with the unanimous support of its stockholders. The hogs will still be raised here, but slaughtered and packaged for sale there before being sent back here. This includes labels of Morrell, Eckrich, Krakus, Cudahy, Premium Hams, Cook’s, Gwaltney, The same with many chickens. They can now be shipped there, but when they come back all that needs to be labeled is that they WERE RAISED IN THE USA. Not that they were processed in China. Our great FDA at work again. The chickens will be all processed and mostly sold to fast food restaurants for sandwiches, along with schools and supermarkets. The China slaughterhouses and processing plants are not nearly equal to the requirements here.

They also purchased land which grows high end wine grapes.  This is just in the USA alone.  Any piece of vacant land in areas where crops can be grown, has been purchased by them.  These buyers are NOT Chinese who are  either permanent residents (Green Card) or who have taken on the US citizenship.  These are 100% citizens of China and misguided American are selling this to them for suitcases full of cash.

We are at war with China!  We better be prepared fighting back with whatever we have.   We can no longer be Mr. Nice Guy. We are partly to blame for building them up to this extent that they can go after us.   We should never have bought any of their stuff and made them so rich.  Now, they are using it all against us. The bottom like this virus is the price we pay for building them up and trading with them.

Muslims are doing virtually the same thing through mass immigration and buying land and building mosques everywhere. When Muslims build a mosque or minaret somewhere that is them saying they have conquered that land. They already consider Dearborn, Mich, as their capital. They own Madison Square Gardens in New York City.

The democrat party is all in favor of a one world order (government). Trump is against all of that which is why they want him out so bad.

If Hillary got in it would be a third Obama term. Remember it was Obama who said “It’s not right that we’re number one” and called our constitution “an outdated document.” Obama brought in 900,000 Muslims and settled them in Minnesota and Mich. That’s where Omar and her likes came out of. That should let you know where he stood and wanted this country to go. That was his hope and change.

Meanwhile, China on Saturday mourned the thousands of “martyrs” who have died in the new coronavirus outbreak, flying the national flag at half-mast throughout the country and suspending all forms of entertainment.

The day of mourning coincided with the start of the annual Qingming tomb-sweeping festival, when millions of Chinese families pay respects to their ancestors.

More than 3,300 people in mainland China have died in the epidemic, which first surfaced in the central province of Hubei late last year, according to statistics published by the National Health Commission.