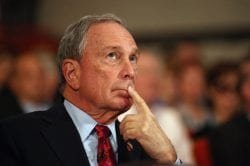 Before voting for Little Mike, you may want to research his religious philosophies. Mike Bloomberg (R)(D)(C)(S) is attempting to buy his way into the White House by being all things to all people. Doesn’t the ‘R’ ‘D’ ‘C’ and ‘S’ beside his name speak volumes about his loyalties? At least Bernie Sanders (S) is proud of his loyalties to the Communist Party – even honeymooned in Russia. His hatred for Republicans and Democrats are not a secret.

In contrast, Little Mike (R) (D) (C) (S) leaves us confused by not knowing whether he is a Republican, Democrat, Communist, or Socialist! Like Bernie Sanders, Little Mike is also running on the Democrat ticket, but neither proclaims to be a dedicated Democrat. Amazingly, Democrats are okay with this and don’t mind the abuse.

After a little research, it would seem declaring Little Mike (G) as a Globalist is the more accurate political brand. Globalists are Chameleons. They change colors as often as needed to hide their real selves to blend into their current environment and complete their nefarious deeds.

In this manner, they easily sneak into societies falsely promoting popular philosophies. When exposed, they simply change colors and move on to their next victims. Regardless, their real intent is only to become wealthy and powerful by destroying lives and communities.

That’s why it is so wrong to compare any Globalist to President Trump. It is not just Billionaires running against the other for public office. No, President Trump is not seeking self-aggrandizement nor does he have a problem with power lusts. With President Trump, it is all about improving America and its Citizens. Such efforts are antithetical to Globalists.

Has anyone known a Globalist willing to proclaim making America Great Again is a good idea? Is there a Globalist dedicated to improving the lives of citizens? Do Globalists hate or love America? Don’t Globalists tell us American Citizens should have fewer rights than illegal aliens? Don’t they also tell us the US Constitution must be shredded?

President Trump is a Billionaire that loves America and fights against Globalist. He is the essence of a government servant. He works 24/7 attempting to improve the lives of all citizens while dodging all of the political shots made by Democrats, Republicans, Socialists, Communists, and Globalists.

In contrast, Globalists imagine themselves as superior humans born to control ignorant citizens. Their primary goal is to fill their wallets and enforce ‘their’ unfounded religious philosophies upon all others. They’ll preach passing gun control laws to take guns away from citizens while surrounding themselves with armed security personnel.

The one thing that sticks out very clearly about Little Mike is he tries to be a Dictator. His actions prove he not only doesn’t love America, but he doesn’t give a damn about America’s Constitution or personal Freedoms! Hmm…

Little Mike’s financial holdings, investments, and businesses make him one of the top wealthiest people in the world. In contrast, President Trump is fixated on attempting to make America first – not himself. Therefore, it would be understandable how this philosophy could threaten Little Mike’s global financial empire and force him to fight President Trump.

Little Mike hasn’t any more love for America than he would for other Countries allowing him to build massive financial empires. If anyone thinks Little Mike is serious about winning the Presidential race, please ask him how he would stop illegal aliens and improve the lives of Americans. Understanding Little Mike explains why he has concluded President Trump must be defeated.

For Little Mike, his options to defeat President Trump are limited. After joining the Democrat Party, he quickly discovered there is no candidate able to compete with President Trump. His Globalist ego doesn’t allow him to do anything without his total control, so his nightmare becomes reality as he buys his way into the Democrat primaries and runs for President.

Unlike other Presidential candidates, his campaign will focus upon defeating Donald Trump – not what he will do for America. As a candidate, Little Mike can now run millions of dollars in negative attack ads against President Trump and there are no repercussions from campaign law violations. It’s a win since he has millions to spend.

Globalists are never concerned with truth and facts – just money and power. Truth and fact be damned – it’s politics, right? He falsely believes citizens are stupid and won’t recognize all the lies and deceptions. Democrats openly support Globalists because they hate America, too.

At the least, Democrats would provide support and welcome him into the Democrat Presidential race – especially if it meant having more money to attack President Trump. Please understand Democrats falsely believe everyone hates Donald Trump so the more hate Donald Trump hysteria, the better!

Having been a Republican in New York but now on the Democrat ticket proves Little Mike’s loyalties are relegated to power and money – just like Democrats. For Democrats, Socialists, and Globalists, it’s always about what’s best for them.

Having no loyalties conveys personal and/or selfish motivations. Perhaps a good example of being disloyal would be the Catholic Pope. The Pope’s recent actions in El Paso, Texas, expose the Pope’s lack of candor.

Instead of promoting obedience to God, the Pope proclaimed the barriers between the USA and Mexico are evil and must be removed to allow illegal’s access to government benefits, jobs, and illegal activities within America. This sort of lunacy forces us to question if the Pope is truly suggesting God’s laws be damned if they interfere with his selfish goals? He knows these actions place a financial hardship on American Citizens.

So, is the Pope a spiritual or carnal believer? The Pope’s demand would be a disastrous event for America and its citizens but the Pope, like Democrats, Socialists, and Globalists remain unconcerned because whatever they do automatically generates collateral damage.

After the first or second time seeing the collateral damage caused by their inept decisions, their hearts become hardened and they begin to think nothing of it. Little Mike appears to have a lot in common with the Democrats, Socialists, and the Pope – it’s all about ‘me’ not ‘thee’.

Just as Democrats, Socialists, and the Pope, Little Mike also has nefarious agendas protected by their camouflages to disguise real intent. Check out these two pet peeves of Little Mike: sugar and guns.

However, if you still believe his fairy-tale, please vote for Little Mike but it will be a vote to destroy America – not to Make America Great Again!

Support Conservative Daily News with a small donation via Paypal or credit card that will go towards supporting the news and commentary you've come to appreciate.
Tags
2020 Election News Democrats Michael Bloomberg