The Trump administration is asking the Supreme Court for permission to enforce a new rule that allows authorities to consider a foreign national’s reliance on government benefits when deciding whether to give them a green card.

The Immigration and Nationality Act (INA) provides that aliens should not be admitted if they are “likely at any time to become a public charge.” In the past, the government defined a “public charge” as a person primarily dependent on a cash assistance program, but the Trump administration expanded that definition in August 2019 to include persons who use Medicaid, housing benefits, or food stamps for a period of months.

A federal trial judge in Manhattan put that change on hold in October 2019. The administration asked the high court to lift that ruling and told the justices in legal papers that it forces officials to give green cards to foreign nationals who should not be admitted, which can’t be revoked even if the government prevails in the legal fight.

“As a result of the injunctions, the government is precluded from implementing its chosen policy and, indeed, will grant lawful permanent resident status to aliens who are statutorily ‘inadmissible,’” the government’s Jan. 13 stay application reads. “No practical means exist to reverse those determinations once made.”

Two separate sets of plaintiffs brought challenges to the rule, which are now before the Supreme Court. Three states and the city of New York filed the first suit, while a coalition of private organizations that provide aid to immigrants brought the second.

Elsewhere in the decision, Daniels said the new rule is “repugnant to the American Dream of the opportunity for prosperity and success through hard work and upward mobility.”

“Immigrants have always come to this country seeking a better life for themselves and their posterity,” Daniels added. “With or without help, most succeed.”

The 2nd U.S. Circuit Court of Appeals upheld the injunctions on Jan. 8, prompting the government’s application to the Supreme Court.

Now before the high court, the government argues the plaintiffs do not have standing to challenge the rule change in the first place. As to the rule change itself, the INA makes clear that the receipt of public benefits — regardless of type or degree — is an important consideration for public-charge denials. In addition, the administration says Congress gave the executive branch wide discretion to make public charge inadmissibility decisions.

“Given Congress’s direction that ‘the availability of public benefits’ should not be ‘an incentive for immigration to the United States,’ and its longstanding history of preserving flexibility in the meaning of ‘public charge,’ the Rule ‘easily’ qualifies as a reasonable interpretation of the statute,” the filing reads.

Nationwide injunctions have beset the Trump administration since the president took office. Attorney General William Barr said such injunctions are inconsistent with the rule of law in a May address to the American Law Institute. The administration told the justices in its filing that the public charge cases present an opportunity to curtail the practice.

Among other critiques, the administration says nationwide injunctions uniquely disadvantage the government. The administration has successfully fought off challenges to its rule change in the 4th and 9th U.S. Circuit Courts of Appeals. However, those victories are effectively meaningless because of the Daniels injunctions.

“In other words, if multiple plaintiffs file multiple suits against a governmental policy, they potentially need to win only a single suit for all of them to prevail, while the government must run the table to enforce its policy anywhere,” the application reads. “That point is vividly on display here, where the government has successfully defended the Rule before two courts of appeals and yet remains unable to put it into effect anywhere in the country because of a single district judge’s nationwide injunctions.”

Justice Ruth Bader Ginsburg, who hears emergencies matters arising from the 2nd Circuit, ordered the plaintiffs to respond to the government’s application by Jan. 22. Thereafter, she will likely refer the dispute to the full court. The case is No. 19A785 Department of Homeland Security v. New York.

Today's Democrat Party, Complicit Media Are the Enemy of the People 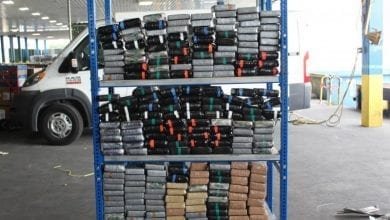 CBP Officers Intercept More Than $6.9 Million in Cocaine Over the Weekend at the Laredo Port of Entry