If Iran is truly good at one thing, it is bragging.  On the other hand, with Donald Trump at the helm – the U.S. is good at something too, following through on threats; AKA promises.

After the U.S. removed a threat (General Qassem Soleimani – with the blood of U.S. citizens on his hands), Iran has embarked on their usual bragging campaign.  This writer is reminded of the empty-headed threats and bragging of Saddam Hussein of Iraq.

Saddam Hussein and his merry band of evil incarnate loyalists were a bunch of deranged power-hungry braggarts subjecting their own people to unspeakable atrocities and evil.  Iran’s leaders are no different.  Their reign of terror worldwide is financed and carried on the backs of their own people, who are happy that General Qassem Soleimani is dead.

Does anyone remember back in the 80s the images that popped up all over of Mickey Mouse flipping off Iran?  That image seems appropriate today as well.

Breaking a 5-day silence over its response for the US killing of General Qassem Soleimani, on Tuesday Iran said it was assessing 13 scenarios to inflict a “historic nightmare” on the US. “Even if the weakest of these scenarios gain a consensus, its implementation can be a historic nightmare for the Americans,” Ali Shamkhani, the head of Iran’s national security council, was cited by Fars news agency, adding that, “For now, for intelligence reasons, we cannot provide more information to the media.” 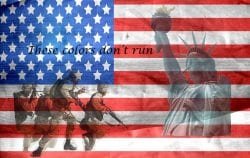 Could Iran cause serious problems for the U.S.?  Without a doubt.  At the same time, Iran (like the previous state of Iraq under Saddam) seems to have no idea that they are biting the tail of the tiger.  In taking out Iran’s precious terrorist and cold-blooded killer, President Trump has shown that he (unlike the fawning and appeasing Obama) is willing to act when needed.

The Iranian Parliament has apparently designated the Pentagon and the U.S. military as terrorists (no this is not a joke).  This is supremely laughable coming from the worst terrorist nation in the world with the most blood on their hands ever.

According to Zero Hedge, Iran’s foreign minister Mohammad Javad Zarif stated that the U.S. “would suffer consequences for the killing of Soleimani ‘at a time and place of Iran’s choosing.’ Zarif added the U.S. must leave the Middle East and warned that if they don’t, a new multi-generational war could erupt.”

The U.S. denied Iran’s top diplomat, foreign minister Mohammad Javad Zarif a visa to enter the U.S. for a meeting at the United Nations this week.

Iran can likely hit targets inside the U.S., but President Trump has informed Iran that there are 52 targets ready to be attacked if Iran is so foolish as to act against the U.S. or our interests.  The Pentagon has just deployed bombers and fighter jets to respond to Iranian actions if necessary.

Again, this is rich coming from the world’s foremost terrorists!  Iran kills in cold blood thousands through their terrorist proxies Hezbollah and Hamas among others including the Islamic Revolutionary Guard Corps, and then has the panache to whine about what Trump says?  Oh, please get serious.

No one needs (or wants, except possibly a few fools) a war with Iran and the loss of life that such a scenario would entail on both sides, but at the same time, the world would be better off without the terrorist regime that unjustly rules in Iran.

Under President Trump the old axiom; “these colors don’t run,” is once again true.  Iran had best keep in mind that the “tiger” has teeth, and is willing to use them.

Support Conservative Daily News with a small donation via Paypal or credit card that will go towards supporting the news and commentary you've come to appreciate.
Tags
Donald Trump General Qassem Soleimani Iran

About the author: Greg is a strong believer in Jesus Christ and is also a political analyst and author. By day he is a self-employed non-emergency medical transport driver, as well as being an author and blogger. His articles are first published on True Conservative Pundit and Inspirational Christian Blogs, and from there the articles are widely published on many well-known conservative websites. If you would like to republish his articles, please feel free to do so leaving all links intact and crediting the author and the website that the article appeared on. Greg is the author of the newly released book: Spiritual Darkness is Destroying America and the Church, available on Amazon.com