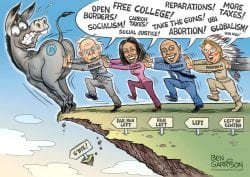 Republicans are rarely celebrated as symbols of bravery, leadership, or standing up for the American people.

There are ample cartoons recommending Republicans run to the nearest spinal shop to get one. This alone confirms the point, right?

Well, while this Hispanic girl fights for America and faces down massive amounts of daily opposition, it only seems fair that I ask Republicans to do something different – stand up for America, please!

Maybe it’s best that I share views from a Christian perspective mandated by God to be enforced – if they want to remain a viable alternative to other political parties.

Proverbs 4:19-27 The way of the wicked is as (total) darkness: they know not (don’t even know the reasons) at what they (causes them to) stumble. My son (listen up everyone), attend (obey) to my words; incline thine ear (listen carefully) unto my sayings (doctrines). Let them not depart from thine eyes (notice everything around you); keep them in the midst of thine heart (save them into your soul for constant recall). For they are life (will keep you alive and well) unto those that find (study and learn) them, and health (will preserve and protect) to all their flesh. Keep thy heart with all diligence; for out of it are the issues of life. Put away from thee a froward (lying and perverse) mouth, and perverse lips (wickedness) put far from thee. Let thine eyes look right on (focus upon goodness and Godliness) and let thine eyelids look straight (stay on target) before thee. Ponder the path of thy feet (be aware of where you walk) and let all thy ways be established (stand firm on the narrow path of Godliness). Turn not to the right hand nor to the left (don’t falter): remove thy foot from evil (never walk into or join others in support of evil – especially hatred of God and goodness).

Republicans are just as able as the rest of us to see the enemy in action – especially in Washington DC! They need to remove the ‘cataracts’ from their eyes, open wide, and accept the reality of what they see!

Instead of fighting, support came from Republicans when opposition Parties were attempting a Presidential Coup. Why couldn’t they see what most Americans knew from day one?

When Republicans see opposition marching, yelling, and kicking it appears they falsely believe such actions have to be legitimate, so they run down the pathways full of snares and traps. Once caught in a trap and exposed, it makes them look like the bunch of fools they are, every time!

Since the 2016 elections, Donald Trump has attempted many critical teaching sessions for Republicans to learn but few ever do. Meanwhile, they continue the age-old tradition of working with the Swamp and fighting President Trump.

Republicans fail to learn anything, plow into the wilderness, and fall into the opposition traps. Tomorrow is déjà vu all over again! They have no successful political strategy.

There is an ancient saying, “Fool me once… shame on you, but fool me twice… shame on me!”

One would think that as many times as the Republicans have been fooled, they would get tired and not want to act like a Jackass and become a part of the opposition party, right?

Currently, it seems there are many more Jackasses in the Republican Party than Elephants. That’s a very bad picture for the public to see, isn’t it?

To date, every executive decision made by Donald Trump has been good for America, but Republicans have fought him every step of the way.

Republicans need to either get on the Trump-Train or get the hell out of the way. You may not like the man, but obstructing this President only serves to harm all Americans!

The 2020 Elections are just around the corner and there are many more voters supporting Donald Trump than any other candidate.

Riding on his skirt-tales but not having the spine to support Donald Trump is not going to be a winning plan for Republican Jackasses!

Support Conservative Daily News with a small donation via Paypal or credit card that will go towards supporting the news and commentary you've come to appreciate.
Tags
Donald Trump GOP Republicans