First of all, let me say that I am the same age as President Trump and never in my life have I seen any politician, president or otherwise have the energy and stamina that he has. These past few days are a great example of that.

On Thursday he flew to Minneapolis and spoke for two hours at a rally without taking a sip of water. On Friday he met with the Vice Premier of China Liu He over trade agreements and made a deal that benefits American farmers and the country as a whole.

The president told reporters in the Oval Office after the Friday meeting with Liu that the two countries came to a “very substantial phase one deal” that will address concerns regarding intellectual property theft and financial services. He added that China also agreed to buy “$40 to $50 billion worth of agricultural products.”

The U.S. Commerce Department on Monday added 28 Chinese firms to a trade blacklist for being implicated in the abuse of Muslim minorities in China’s northwestern Xinjiang region ahead of Friday’s meeting.

That should be a lesson to these punk demonstrators who say he hates Muslims.

Following the trade agreement in the oval office, Trump then hosted the World Champion Little League Team in the white house and then flew them with him to his rally in Louisiana where he spoke for another two hours without taking a sip of water.

I understand Trump gets only four or five hours of sleep a night. He gets up at 6 a.m. every morning and starts work by 8 a.m. and works until midnight meeting foreign dignitaries and making deals with businessmen and countries, meeting with various organizations, meeting with his cabinet, and flying to parts of the country for rallies, meeting with survivors of  terrorist attacks, meeting with families of fallen heroes and anything else that comes across his path including flying overseas to various countries like Great Britain, North and South Korea, China, etc.. He is like a non- stop well oiled machine. I get exhausted just reading about where he is going and what he is doing.

Keep up the great work Mr. President and don’t let these critics get you down. We all have skeletons in our closet and foibles in our lives which makes us all human. It’s what you and we accomplish that counts. Keep holding true to your promises like you have been doing Donald. The American people who care are behind you. The incredible, massive turnouts at your rallies show it. 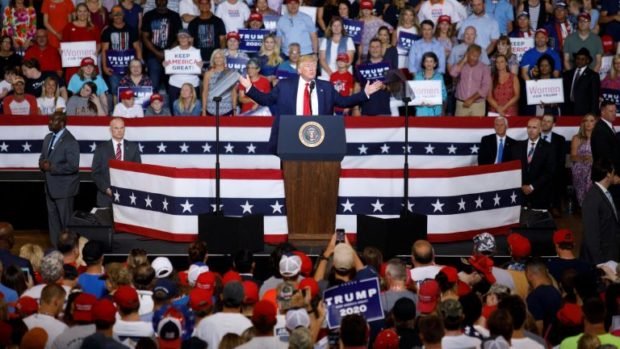